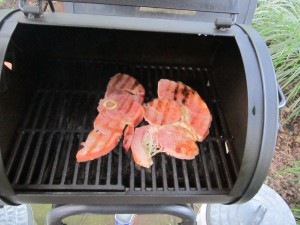 As a cook, it’s easy to get into a rut. You find a few staples you enjoy and then it’s steak, pork chops, chicken and fish; steak, pork chops, chicken and fish. At the market, I was looking for a change of pace and thought about ham. But when there are only two to cook for, ham is not a meal, it’s a commitment. It’s almost like “till death do us part.” Even if you eat ham for a main course and have leftovers the next night, plus multiple sandwiches, you’re eating ham for an eternity it seems, and I hate to freeze meat like that. But I happened across a very nice looking ham steak and it was like six bucks. So, ham it would be.

But how to cook it? Normally, with a ham steak, I toss it in a frying pan in a little oil, brown it on both sides and dig in. It’s okay that way, but I wanted something special. Leafing through old recipes, I found one for marinated, grilled ham steaks and it was superb, and easy. Here’s how.

Find a nice 16 to 20 ounce ham steak to serve 2 or 3 people (Smithfield has some good ones). Make a marinade of melted butter, brown sugar, pineapple juice, paprika, garlic powder and dry mustard. A small can of sliced pineapples has just enough juice for the marinade, so I used that and had a pineapple, cheddar and lettuce salad as a side. Marinate the ham steaks (I had to cut my steak in two to get it in a Zip Loc) for at least two hours. Then, over low coals, cook the steaks about 5 minutes per side, no longer. What a wonderful flavor. It almost makes you wish you had cooked a bigger ham.

Combine the first six ingredients and marinate at least 2 hours in the refrigerator. Grill 5 minutes per side over low charcoal. Enjoy!

I am Jim Brewer, Editor of the new CvilleBuzz, a humble on-line attempt to entertain those, not only … END_OF_DOCUMENT_TOKEN_TO_BE_REPLACED