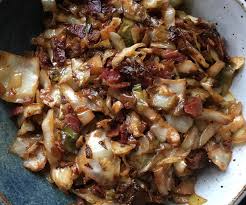 I  was thinking about what to have for dinner Saturday night, and I decided to try something different. I had a small steak, but wanted some different sides. I had picked up a cabbage yesterday, thinking coleslaw.
Instead of coleslaw, however, I decided to fry some cabbage; I  had not done that in years. I shredded half a cabbage, added a sliced onion to the cabbage (had never done that) and decided to boil some potatoes and put them on stove.
I wanted  cornbread, but I was out of cornmeal, so I had toast.
Mom always added a pinch of sugar to boiled cabbage. Never saw her add sugar to fried cabbage, but I added  a small wee pinch. It was a mistake, I could taste it in the fried cabbage, but I added some black pepper to the cabbage.

I fried the cabbage in LouAna oil, added a little salt and pepper and fried till almost black. I ate it with a little vinegar.
I used some Koss Sauce for the steak and enjoyed the fried cabbage and boiled potatoes, but I missed the cornbread.
It was not bad. Down-home cooking.

I am Jim Brewer, Editor of the new CvilleBuzz, a humble on-line attempt to entertain those, not only … END_OF_DOCUMENT_TOKEN_TO_BE_REPLACED