You are here: Home / Now We're Cooking / Eye of Round Roast 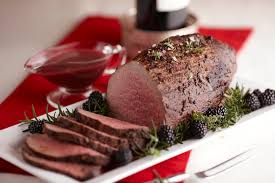 The eye of the round in roast form is one of the best values of all cuts in the meat department. The eye of round has a wonderful flavor, but it’s tough, plain and simple. There is an answer, however, for tough cuts like the eye or round. Cook it at a high temperature to seal in the juices and slice it razor thin.

Unfortunately for me – being one of the world’s worst knife sharpeners – I lack the skill to manually cut meat in wafer thin slices.

A few years back, my wife Nancy, recognizing my limitations in the sharpening department, bought me a Cuisinart Electric Slicer, and this baby will cut meat so thin you can read a newspaper through the slices. I use it often for country ham, and last week I used it for the eye of round roast and it made just about the best roast beef sandwiches you’ve ever put in your mouth.

Here is how I cooked the roast.

Turn the oven to 500 – that’s a hot oven. I took the roast out of the fridge early to let it get closer to room temperature and I rubbed it with a little olive oil and then added a Montreal Steak rub along with kosher salt and coarsely ground pepper.

Put the roast in the inferno and cook 5 minutes per pound, then turn the oven off and DO NOT open the oven door for two hours. My roast weighed 3.7 pounds so I cooked it exactly 18 ½ minutes before turning off the heat.

When you take the roast out for carving, it will be a nice pink inside and full of juices. If you’re a world-class meat slicer, go for it, but if not, stick the roast up against your commercial slicer and shave away.

I am still eating and enjoying the sliced roast beef sandwiches. Arby’s would be proud to claim these as their own

Try an eye of round, cook it on ultra high heat and slice thinly with a commercial slicer. Good stuff.

Eye of Round Roast

3 to 8 pound eye of round roast

Cook in a 500-degree oven for 5 minutes a pound, turn off the oven and don’t open the oven door for two hours.

Cook It All On The Grill

I am Jim Brewer, Editor of the new CvilleBuzz, a humble on-line attempt to entertain those, not only … END_OF_DOCUMENT_TOKEN_TO_BE_REPLACED