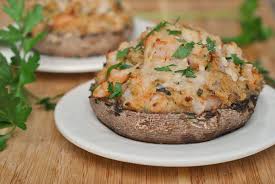 To create a delicious entrée with portabella mushrooms and fresh crabmeat is really a no-brainer. You can hardly go wrong, but here’s how I proceeded.

I rinsed and dried the mushrooms, removing any center stems so they would hold plenty of crabmeat. Next I put the crabmeat in a sauce pan and flaked it apart, adding a sauce consisting of a half stick of melted butter, a teaspoon of garlic salt, 2 tablespoons of Old Bay, a little salt and pepper and the juice of a half of a freshly squeezed lemon.

I warmed the concoction and set it aside. Next, I drizzled a little olive oil in the mushroom cavities, divided the crab into four parts, stuffed the portabellas and cooked them in a 350 oven for 25 minutes – garnished with lemon slices. Some put cheese with crabmeat, but I like it plain.

It was delicious, but as I said, how can you go wrong with crabs and portabellas?

I am Jim Brewer, Editor of the new CvilleBuzz, a humble on-line attempt to entertain those, not only … END_OF_DOCUMENT_TOKEN_TO_BE_REPLACED