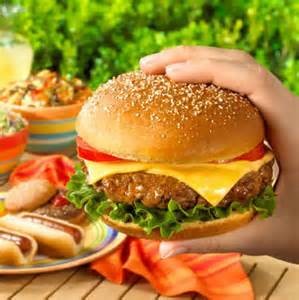 Anybody can cook a hamburger. Take a piece of ground meat, throw it on a grill, put it in under the broiler or on a griddle and cook away. When done, top it off with your favorite combination of condiments and you’ve got yourself a hamburger.

If you’re totally satisfied with your burgers, read no further. But if you’d like to serve what I believe is the perfect hamburger at your next cookout, read on.

The perfect hamburger has perfect flavor, and there are two vital ingredients in creating superb flavor when cooking with beef – salt and fat. I believe that both of these key ingredients are largely overlooked during the creation of most backyard burgers.

Salt – no matter the type – is sodium chloride, but the source of the salt and how it is processed can be like night and day.

Salt is a fascinating ingredient. Until the past 150 years or so, salt was among the most valuable commodities on earth – rivaling gold and silver in some cases. Salt was strategic not only in cooking and preserving, but in curing and healing. It is said that Napoleon was forced to retreat from Moscow because his army lacked salt and their wounds would not heal. Dating back even further, Roman soldiers received part of their pay in salt, and many used it to buy slaves for their personal use.

“He is not worth his salt” is a saying from that time.

Most salt today is mined from large deposits remaining from dried salt lakes. Table salt, sometimes with an iodine additive, is a fine-grained salt used commonly in cooking and as a table condiment. Kosher salt is an additive-free version and is used widely by gourmet cooks who prefer the flavor and texture. Sea salt comes from the evaporation of seawater, and is available in fine or coarse textures. My choice for the perfect hamburger is kosher salt. I want the kosher salt not only for its flavor, but because it will help form a crust on the burgers to enhance the flavor.

Now for the fat part.

Fat has a bad name today. One bite of fat, say the health experts, and you’ll go belly up within hours. Well, maybe that’s an overstatement, but you know what I mean. But in the bible, they didn’t kill the lean animal, but the “fatted” calf when they wanted to celebrate the return of the prodigal son. I also remember a story about fat that my dad told me when I was just a boy.

He was an FBI agent on a trip to Pittsburg and was eating dinner with three of his associates. They all ordered steaks. When they came, one agent noted “excessive” marbling in his steak and asked the waiter for another one, upon which Dad said, “Here, take mine. It’s leaner. I’ll eat yours.”

Dad said it was the best steak he ever put in his mouth. Fat has a way of making beef better, especially when it comes to hamburgers.

A trip to the butcher reveals multiple choices when it comes to ground beef. Some blends include up to 96% lean meat. Some is made from the round and some exclusively from sirloin. Ground chuck is generally 80-20, but my preference for perfect backyard burgers is the 73-27 blend.

All that fat? Yes, all that fat. But remember, most will cook out.

I begin my burger creation with eight-ounce spheres of 73-27 ground beef, about the size of a tennis ball. I like them big because bigger burgers are juicier. I shape them firmly, and then sprinkle a heavy layer of both kosher salt and coarse ground pepper all around. I then let them rest on a wire rack for up to an hour.

Put the burgers on the grill over medium heat. You want the meat to cook slowly at first, so the salt and juices will thoroughly permeate the meat. Don’t turn until the burgers are brown on one side – and you will notice the salt-fat-pepper crust beginning to form.

Brown on the other side before beginning to flatten the burger. Don’t smash all at once but begin to gradually shape the patty into a thick oval so it fits better on a bun. At the end, most of the fat will melt away and the beauty is that the fat and salt seeps through the burger as it cooks. These burgers, I’m telling you, are fantastic.

And they don’t require much in the way of condiments. A slice of Vidalia onion and fresh tomato, some lettuce, and a dab of mayonnaise pretty much seals the deal. And they won’t need salt.

Try these burgers. They may not be perfect, but they’re close.

Shape ground meat into tennis ball size patties and put a thick layer of salt and pepper all around. Let the burgers rest on a wire rack on the counter for 30-60 minutes.

Cook over a medium hot grill. Brown on both sides before gradually beginning to flatten the burgers to fit the buns. Medium rare works for me, but even well done burgers will be exploding with juice and flavor.

I am Jim Brewer, Editor of the new CvilleBuzz, a humble on-line attempt to entertain those, not only … END_OF_DOCUMENT_TOKEN_TO_BE_REPLACED