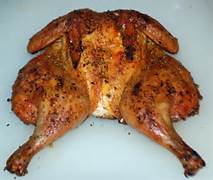 When it comes to chicken, size matters. But in this case, the smaller, the better.

When I was about 14, I spent the night with a classmate, Larry McDaniel, whose family owned a small farm on Muddy Creek Mountain, just outside Lewisburg, WV.

Larry and I were going squirrel hunting early the next morning, so I spent the night and ate with his family the night before.

For dinner, Mrs. McDaniel fried a chicken, one of her own, and it was quite small. I don’t know if it was a bantam or just a small chicken, but was incredibly good. So good that I can still remember eating that chicken leg over 50 years ago. I now believe that it was good because it was young and tender, and those chickens are hard to find today, unless you raise your own.

But!
Lo and behold, I was shopping at Food Lion recently and saw some small chickens in packages beside the plump Tyson and Purdue birds. Instead of 7 pounds, these were 3 pounds or so. I bought one, and while it was not quite as good as the one Mrs. McDaniel cooked, it was damned close.

The fat fryers in the stores are just that – lots of fat. Lord knows what kind of chemicals they eat to get them that plump that quickly. I’ll eat them, of course, but better by far are the smaller birds. The brand Food Lion carries is All Natural and they cost about $1.99 a pound for a whole chicken, and they are worth every penny.

Sometimes when I haven’t planned ahead, I’ll stop by Food Lion, pick up one of their All Natural birds and cook it for dinner. If I’m home by 5:30, I can “spatchcock” the bird (remove the back bone and neck) put it in a 425 oven and be eating tender and juicy chicken 45 minutes later.

Try one, and you’ll also be a believer that smaller is better when it comes to chicken.

Here is my recipe for a 45-minute “Chicken Little”.

A dash of garlic powder

Remove the back and neck and flatten the chicken in a casserole dish. Rub with olive oil; add salt and pepper, garlic powder and Sauer’s Chicken Rub. Cook in a 425 oven for no more than 45 minutes. Enjoy!

Pigs In A Blanket

I am Jim Brewer, Editor of the new CvilleBuzz, a humble on-line attempt to entertain those, not only … END_OF_DOCUMENT_TOKEN_TO_BE_REPLACED