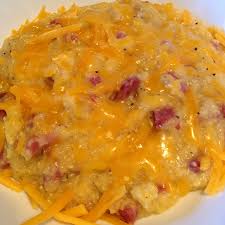 We were having our good friends Wayne and Elva Ferguson over for a Sunday brunch. Nancy asked that I fix some “Blueberry Stuff”, my version of a Blueberry Cobbler, only with enough butter to clog about 6 feet of arteries. I was going to fix a Quiche Lorraine, but two baked dishes? Maybe not.

But how about grits? They go with anything, but I needed a meat of some sort and some eggs. I decided to do a Cheesy Ham and Grits dish, not a baked casserole – just grits, cheese and ham and that would solve my meat requirement. It was an experiment, but it was delicious. We all had seconds.

This is so easy it shouldn’t even be a recipe. I don’t know why I’ve never done this before, but rest assured, I’ll do it again. It’s a great breakfast addition.

Some folks don’t care for grits. Many have never eaten grits. I grew up on grits. They were inexpensive, filling and they went with everything. In the past ten years or so, all the Gourmet Chefs have been using grits as a companion to things like shrimp and scallops.

I use Quick Grits, not Instant Grits. There is a world of difference. It says on the box that Quick Grits take 5 minutes. The box lies. It takes longer. Fifteen minutes is more like it because you have to let the grits rest in the pan, absorb all the liquid and firm up. So allow fifteen minutes, but that’s still pretty quick.

The package also lies about serving sizes. If it says on the label recipe instructions, “Serves Four”, they don’t mean it serves four people. It’s more like four platoons of starving North Korean soldiers. I reduced my portions to three-quarters of what they said were 4 servings and it would have served 8, easily.

I also cheated. I used John Morrell Diced Ham. It comes in 8-ounce packages. It’s already diced, it’s fully cooked and you just break it up into the grits, add a cup of shredded cheddar, some salt and pepper, a healthy chunk of butter and you’re in business.

To complete the menu,  I fixed some fluffy scrambled eggs along with the Blueberry Stuff and Cheesy Ham & Grits. I also added some toasted bagels and creamed cheese and it was a perfect brunch – and so easy. Here’s exactly how I did the Cheesy Ham & Grits.

On the Road for Snakeheads

I am Jim Brewer, Editor of the new CvilleBuzz, a humble on-line attempt to entertain those, not only … END_OF_DOCUMENT_TOKEN_TO_BE_REPLACED