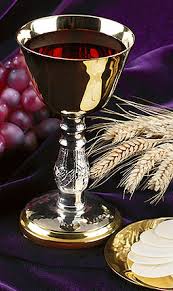 Nancy and I had met Larry Hastings at a Blue Ridge Builders meeting. He was pastor at Park Street Christian Church and invited us to attend. One Sunday we did.

I always like to sit near the front, not the back of a church, so on this particular Sunday we went to the front and took a seat on the second pew.

As it turns out, the Church was celebrating communion that morning. Our normal routine for a communion at our Presbyterian Church was to stay in the pew, have a little piece of the cubed bread passed on the plate by an elder, followed by a tiny plastic shot glass of Welches Grape Juice.

When Larry announced communion, the usher escorted us to the front – we were the first in line.

One of the church officials was offering a wafer, like the Catholics use, so I figured this was a Catholic-like communion where they put stuff in your mouth. He held the wafer out, and I bent down and ate it from his hand. Nancy followed. Same thing. The next official had a chalice and I naturally assumed I was supposed to drunk directly from the cup so I leaned forward to take a sip. He looked a little befuddled and moved the chalice to the side, but I still managed to get a sip directly from the cup. Nancy did the same.

On the way back to the pew, Nancy delivered a stiff elbow to my back and said – under her breath – “Holy Moly, Jim Brewer.” Except she didn’t say “Moly” – it was a much stronger ending to “Holy”.

I then looked back at the rest of the Church taking Communion as they each took a wafer from the official, dipped it in the chalice and then ate it.

I think it’s called “Communion by Intinction”, but I didn’t know that.

Nancy whispered again, “We’ve got to get out of here. I am so  embarrassed.” But we could hardly leave early since we were practically on the front row.

It seemed like a month passed before the service ended and we left as soon as we could, but Larry still beat us to the door.

We both apologized profusely, but he said, “Don’t worry. It happens all the time.”

From that time forward, whenever we visit churches, we sit in the back, not the front.

Pigs In A Blanket

I am Jim Brewer, Editor of the new CvilleBuzz, a humble on-line attempt to entertain those, not only … END_OF_DOCUMENT_TOKEN_TO_BE_REPLACED