You are here: Home / Neat Stuff / Wow! A Blue Grosbeak! 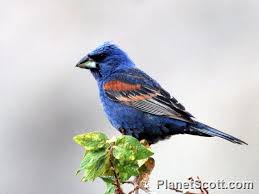 “Jim, come quick. There’s a strange bird beneath the feeder.”

Reluctantly putting down my morning paper, I went to the kitchen window and saw the blue bird feeding.

Then the bird turned and it was all blue, except for its scarlet tipped wings. Maybe an indigo bunting or a mountain bluebird?

Nope, it was a blue grosbeak and alongside the beautiful blue male was his lady friend, entirely brown, like a fat sparrow.

A time or two, we’ve had rose-breasted grosbeaks that passed through, but I have never knowingly seen a blue grosbeak.

Apparently, these are migratory birds, spending their winters in deep-south tropical climates.  In recent years, the beautiful blue birds have been expanding their range more to the north, like Virginia.

They like hedges and thickets and often form flocks and feed in fields. The blue grosbeak diet consists mostly of insects. In the summer, they devour caterpillars, locusts, spiders, snails and even praying mantises. They will eat seeds, and our two blue grosbeaks were feeding on some excess parakeet seeds that our two resident pets rejected. Blue grosbeaks are primarily ground feeders (which is why it’s so important not to feed exclusively from feeders). They will sometimes hover or fly up from the ground to snare insects. Except when they are nesting, they travel and feed in flocks.

I figured the sighting was a once-in-a-lifetime thing, but Nancy saw them again the next day.

We have hedges, thickets and shrubs and they will not lack for bugs and seeds. Maybe, just maybe, our two blue friends will build a nest here?

A Cooking Tip for BBQ

How Do It Know?

I am Jim Brewer, Editor of the new CvilleBuzz, a humble on-line attempt to entertain those, not only … END_OF_DOCUMENT_TOKEN_TO_BE_REPLACED