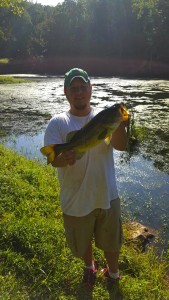 Robert Kloby, from the Orange County High School Anglers, was recently selected to the All-State Team for Virginia. Robert resides with his parents, Robert and Kristi Kloby, at 5483 Burr Hill Road in Rhoadesville.

Robert has numerous awards for big fish and most weight to his credit. He has also participated in many community events. Robert received second place in the state tournament JV division in 2012 at Bugs Island. He also participated in the first “Build a Lure Tournament” on June 10, 2012 and took 1st place for the best lure.

Robert sells tickets, wreaths and poinsettias for his club. In 2012, he earned 2nd place in the Orange County Agriculture Fair for a handmade spinner bait

Over the past two years, he has participated in almost every OCHS fishing tournament and has earned numerous big fish and weight awards

He has been certified and has acquired boater’s safety education through VDGIF. He caught a citation largemouth at Lake of the Woods, which measured 24 inches and weighed 7 ½ pounds. He also volunteers Graves Mountain Lodge Trout Fishing Kids Tournament and managed the trout pond at Waynesboro Expo fly Trout Fishing in 2011. These are just a few of his accomplishments.

Robert is hoping to get a sponsor to help improve his techniques and upgrade his fishing gear.

Says Robert; “I enjoy volunteering along with my parents to raise money for Easter Seals of Virginia – for kids with disabilities. I also like to make artificial lures to fish with plastics and once helped my dad fix a jon boat up to fish in jon boat tournaments. I will also be placing a duck box at my friend’s pond.”

Good luck with your fishing and thanks for your contributions to your community, Robert. Tight lines!

I am Jim Brewer, Editor of the new CvilleBuzz, a humble on-line attempt to entertain those, not only … END_OF_DOCUMENT_TOKEN_TO_BE_REPLACED