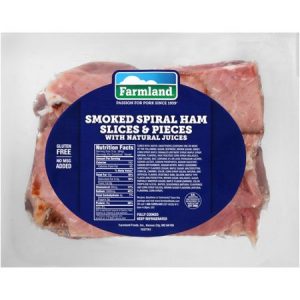 I was going to make some ham and cheese sliders. Certainly I didn’t need a whole ham and I’m not crazy about the sliced, preserved ham in packages. I saw a pack of ham from Kentucky Legend, neatly sliced, but it was about ten bucks, more than I wanted or needed. Then, I came across a package of Spiral Ham Pieces and Slices from Farmland. It was just $2.67 a pound, so I bought a small package. That night I made a dozen ham and cheese sliders and they were fabulous, and I had plenty left over. This ham is outstanding and a real bargain.

It’s nice to get an entire spiral ham, neatly sliced, but once you put it in a sandwich or casserole, who cares what it looks like.

I figured there would be some really oddball pieces and a lot of fat in the package of pieces and slices, but there weren’t. I suppose Farmland just packages the trimmings from their regular spiral hams and offers an incredible value. Besides, what else can you do with ham trimmings?  It’s not like making hamburger.

They come in packages of between 1 ½ and 2 pounds – enough to do the job, but not so much you get sick and tired of ham. I bought the ham at Wal-Mart Grocery.  Since then, I’ve looked for it elsewhere with no luck.

In addition to sandwiches, this ham is excellent as a side with a fried egg or two for breakfast and it goes well in any ham casserole or soup.

If you ever see it – Spiral Ham Pieces and Slices from Farmland – get a package. You won’t regret it.

I am Jim Brewer, Editor of the new CvilleBuzz, a humble on-line attempt to entertain those, not only … END_OF_DOCUMENT_TOKEN_TO_BE_REPLACED