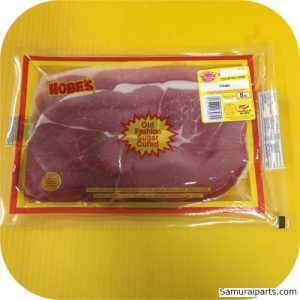 Is there anything that smells more delightful than a big pot of green beans cooking on a stove? Hardly. But I think I have happened upon the best seasoning ever for green beans.

String beans are good with just a little salt and pepper, but a splash of bacon grease or a slab of fat back makes the flavors come alive.

Still, both those seasonings can be a little greasy and sometimes too strong.

When I was at Lake Norman, near Charlotte, on a family reunion a few weeks back, I was in charge of cooking a big batch of green beans. In Moorefield, I have discovered one of the nicest Food Lions anywhere. If you didn’t know better, you’d think you were in a huge, upscale Harris Teeter, only with lower prices.

We ordered our catered dinner from that Food Lion – fried chicken, mac and cheese and potatoes – and it was quite good, but they didn’t offer green beans, so that’s when I decided to cook our own and I needed some seasoning. As I was poking around in the meat section, I saw a pack of country ham skin. It looked like it would add flavor but not a lot of grease, so I bought a pack.

The seasoning was perfect! They may have been the best green beans I have ever eaten.

When I got back to Charlottesville, I pulled out the remainder of the ham skin package and found the name of the manufacturer. It was Hobe’s Country Ham cured in North Wilkesboro, NC
I have since looked high and low, but nobody around Cville carries Hobe’s. I’m heading back to Moorefield in a few weeks and plan to stock up on the ham skins, and I’m also going to try their sugar cured country hams – which have received rave reviews.

Hobe’s Country Hams. Remember that name. If you see it, buy it!

I am Jim Brewer, Editor of the new CvilleBuzz, a humble on-line attempt to entertain those, not only … END_OF_DOCUMENT_TOKEN_TO_BE_REPLACED