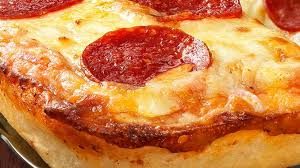 We had just returned from a long drive home. It was Monday night and we needed something to eat, but not much. UVA was playing and we didn’t want to go out. Since I had to run to the grocery store anyway, I decided to just pick up a frozen pizza. How bad could it be? It turned out to be delicious. It was a DiGiorno.

I can’t tell you the last time I bought a frozen pizza. Probably 30 years ago when the kids were young. I would have been delighted had this pizza just been edible, but I would rank it as good if not better than any pizza I’ve had in Charlottesville with the exception of Anna’s. Nothing is as good as an Anna’s pizza.

I bought a thin crust DiGiornowith pepperoni. It was about six bucks. And it was scrumptious. All you need do is turn the oven to 400, put the frozen pizza on a flat pan and cook it about 14 minutes, and it’s ready to rumble.

DiGiorno takes extra care with their crusts. The dough is left to rest for 30-90 minutes, allowing each crust to rise and develop flavor and texture.

Their sauce is made with California-grown tomatoes, and blended daily along with their spices and seasonings. You can add stuff to the frozen pizzas if you’d like – more cheese, some garlic salt and red pepper for example, but it’s pretty good the way it comes out of the box.

If you’re like me and haven’t had a frozen pizza in years, try a DiGiorno. As good as they are, and as inexpensive, why ever order out?

It’s Kosher: Salt That Is

I am Jim Brewer, Editor of the new CvilleBuzz, a humble on-line attempt to entertain those, not only … END_OF_DOCUMENT_TOKEN_TO_BE_REPLACED