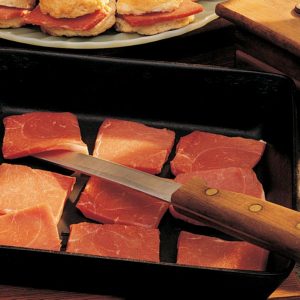 I was born in Raleigh, NC and I was raised on country ham. Often, country ham or fat back was the only meat on the table. Sometimes Uncle Sidney would come back from the coast with a bushel of oysters – he tonged them himself – and sometimes we’d have a roasting hen for Sunday dinner, but it was often country ham.

Eastern North Carolina was hog country. Many families in the country or outskirts of town would raise hogs and butcher them in the fall. The tenderloin and chops were quickly eaten, but since refrigeration space was a scarce commodity, the hams and bacon were cured – sometimes sugar cured, sometimes smoked and often cured with salt and pepper. Curing methods were closely guarded family secrets, passed from generation to generation. Some used 8 pounds of salt to 100 pounds of meat while others rubbed molasses and sugar on their hams, which were hung and aged in a barn or shed.

As a boy, it took me a spell to get used to the saltiness and toughness of a country ham, but I now consider myself a country ham fanatic. Nothing beats a hot biscuit smothered in butter with a fried slice of country ham. Recently, I discovered Clifty Farm Hams and they are terrific. Nothing makes a better country ham biscuit.

Clifty Farm is based in Paris, Tennessee and those folks in the Volunteer state are long-time country ham artists. The ham-meisters at Clifty Farms use a combination of salt and hickory smoking to cure their hams. They are sweet and tender (as a piece of country ham can be) and the flavor is superb.

Some people soak their hams in fresh water to remove some of the saltiness, but not me. Bring it on, I say to the saltiness. There’s no such thing as too much salt.

The best way to cook a slice or two of Clifty Farm hams is to spray a little Pam in a skillet and fry the slices quickly over medium heat until just brown on each side. A scrambled egg in the pan drippings makes a perfect addition to the ham biscuit.

Kroger’s in Rio Hill Shopping Center carries Clifty Farm Ham or you can order any of their products – sausage, ham, bacon and smoked turkey – on line at CliftyFarm.com. It’s a truly unique flavor. Try some.

I am Jim Brewer, Editor of the new CvilleBuzz, a humble on-line attempt to entertain those, not only … END_OF_DOCUMENT_TOKEN_TO_BE_REPLACED