You are here: Home / Neat Stuff / A Gayle’s Ham For Christmas 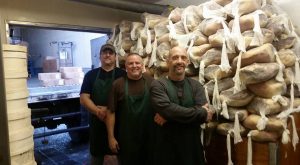 Hams make a great Christmas gift, and there will be lots of them exchanged later this month – Kite Hams, Turner Hams, Smithfield and the like. But the best ham of all in my opinion, and the most reasonably priced, is a Gayle’s Ham. I wouldn’t trade a Gayle for any of the above.

I discovered Gayle’s Hams a number of years ago in my travels to and from the Harrisonburg area. Gayle’s Market is a small store in Penn Laird with a sign advertising everything from steamed crabs to chicken eggs, I stopped once for a drink and some Nabs and was so enticed by the smell of country ham inside that I bought one of their ham sandwiches in a basket beside the counter. I have been a fan ever since. They have remarkable hams.

Gayle’s has a little history behind it. Opened some 47 years ago, the owner, Gayle Cupp, intended his operation to be a gas station that sold country hams. It turns out that it became a country ham store that used to sell gasoline.

I chatted once with Gayle, and asked about his hams, why they were so good. He explained that his hams came primarily from one hog farm in North Carolina. He bought only the best and his hams are truly unequaled in Virginia.

In addition to hams and ham sandwiches, the store has excellent produce, chesses, and sweets. But it’s the hams that stand out.

Too often, these old places die out, but I don’t see that happening to Gayle’s Market. They have built a solid business offering terrific food at good prices and with wonderful service.

If you get a chance, stop by and pay Gayle’s a visit. The store is located at
5439 Spotswood Trail in Penn Laird, on Rt. 33 heading west to Harrisonburg. Strike up a conversation, ask about their fresh breads and produce, and for goodness sake, sample some of the best country ham in Virginia. But if you don’t have time and want to give someone a terrific ham for Christmas, Gayle’s Market will come to you. They ship anyplace in the United States.

I am Jim Brewer, Editor of the new CvilleBuzz, a humble on-line attempt to entertain those, not only … END_OF_DOCUMENT_TOKEN_TO_BE_REPLACED