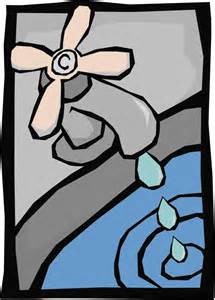 I had just finished my Sunday morning shower and turned the faucets off. The cold water responded, but the hot water side did not. Hot water continued to flow from the uncooperative faucet.

Oh great, a Sunday and an endless flow of hot water. This was going to cost me, if, that is, I could even get a plumber to come out and fix the problem.

First, I tried my hand at plumbing repair, which is like me dunking a basketball with a reverse jam. Miraculously, I was able to remove the cover to the hot water faucet, but when I turned the contraption with some pliers (fishing pliers) it had no effect. Then, I tried to figure out how to turn the hot water off to our bathroom. Couldn’t be done, so I went downstairs and shut off water to the entire house. Then I called one of the plumbers I have used in the past. The answering service lady said a plumber would return the call. A half-hour passed and no call, so I searched the yellow pages for another source. Then I saw Mr. Faucet in very small print. Mr. Faucet is owned by a long time friend, Pat Crowley, but I didn’t think he was still in that business. Years ago, Pat helped me fix a commode leak. He is not a full-fledged plumber in the sense that he can connect plumbing lines to houses, but he can do smaller projects and at a fraction of the fees of normal plumbers.

I don’t begrudge a plumber his rightful earnings, but I can go to my primary physician for an hour-long check up and it often costs less than a typical visit by a plumber to fix a couple leaks. And most plumbers these days have fixed rates. They may charge you for an hour even if they take only 10 minutes to fix the problem,

I called the number of Mr. Faucet and Pat answered. I explained my problem and he said he’d be over as soon as he finished installing a new sink for his client.

It was good to see my old friend. We had once fished and hunted together often, but we had lost touch.

Pat examined the problem and said, “Let’s go to Lowe’s. With a little luck they will have the part we need.” Luck was with us. Pat found the part. It was about $25. Back at the house, it took him maybe 15 minutes to take the old contraption out and install the new one. Problem solved.

The last plumber I had used said my plumbing in my bath was old and they might have to tear out all the ceramic tile to eventually correct the problem. That would have been costly beyond imagination.

Mr. Faucet fixed the running water leak and charged me $50. Pat gets $60 an hour, no service call fees, and if he does a job in ten minutes, he charges only for that time spent.

“But, Jim, people call me back,” was his response.

Maybe you don’t have a small plumbing repair job at hand, but you will in time. I suggest you keep this number and give Pat a call. Tell him I sent you.

I am Jim Brewer, Editor of the new CvilleBuzz, a humble on-line attempt to entertain those, not only … END_OF_DOCUMENT_TOKEN_TO_BE_REPLACED