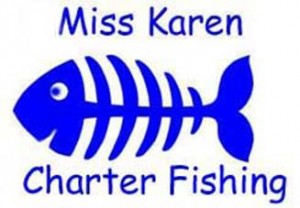 For 34 years, Dr. Dick Whitehill paid the rent with his scalpel. He was a noted orthopedic surgeon for the University of Virginia Hospital. But for the past three years, since retirement, the doctor changed uniforms. Instead of scrubs, he now has a Penn baseball cap, a pair of well-worn jeans, and he fishes for a living. Capt. Dick Whitehill is a charter boat captain based in Topping, VA on the Rappahannock River. As good as he was as a surgeon, he’s that good when it comes to catching fish. In fact, maybe too good.

When the thirty-third striper came across the gunnel last November, Courtney Craft and I had had enough. Take us home, Dr. Whitehill – excuse us – Capt. Whitehill. Courtney and I had been aboard the Miss Karen hauling in rockfish one after another. I had also enjoyed a great outing with Capt. Whitehill fishing for spot in early fall.

Capt. Whitehill and his wife Karen are long-time residents of Earlysville, near Charlottesville. The couple also maintains a cottage at Topping and makes frequent runs down I-64 and through West Point on the way to their cottage, where Capt. Whitehill runs both a Maycraft 25.5 with a Yamaha and a Bertram 31 with twin Cummins 315 diesels.

Not many surgeons become commercial fishermen, but that line of work appealed to Dr. Whitehill. After 34 years in orthopedic surgery, he now performs his operations in the fishing waters around the Middle Peninsula and in the middle Chesapeake Bay area.

On an earlier spring trip, while scouting for stripers, I asked Captain Whitehill why he decided to become a charter boat captain.

“It’s the challenge,” he said. “It’s always a challenge to put your clients in a position where they can catch fish and have a good time. I really want my clients to catch fish.”

Just as no surgeon wants to tell the waiting family that an operation didn’t go well, Capt. Whitehill has an aversion to taking out a party of fishermen without good results. As much as any charter captain I’ve fished with, no one wants his clients to catch fish as much as the former surgeon. He frequently calls his clients if conditions are anything less than ideal, trying to reschedule a better date rather than coming back to the dock empty handed.

Captain Whitehill fishes for flounder, croakers, spot, bluefish, cobia, rockfish, red drum, speckled trout, tautogs and other species in and around the middle Peninsula, but his passion is catching Spanish mackerel.

“It’s a faster paced way of fishing,” he noted. “But if you can get on them, you can fill the ice chest in short order.” Dick confessed to catching the delicious tasting fish up into the 7-pound category. That is a nice Spanish mackerel.

The previews of coming attractions for the saltwater fishing scene in Virginia include croakers and flounder, which will begin biting this month. Soon after, Capt. Whitehill will begin to target rockfish as the trophy rockfish season kicks off . Also in May, the flounder, red rum and bluefish begin biting in earnest, followed by cobia and spot. The mackerel bite is best around July and into August.

So if you’re thinking about a saltwater trip (a great Father’s Day gift), contact the doctor who specializes in fishy situations. Call Capt. Whitehill 434-978-1941 or check out his website at www.misskarencharterfishing.com

Thoughts On Selling Your Home

The Eyes (Don’t) Have It

I am Jim Brewer, Editor of the new CvilleBuzz, a humble on-line attempt to entertain those, not only … END_OF_DOCUMENT_TOKEN_TO_BE_REPLACED