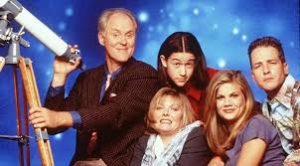 The cable company called me this week and offered free cable TV for a year if I would sign back up.  We had dropped the cable about a month or so ago when our bill hit $150 and we didn’t even subscribe to any of the premium channels.

“No thanks,” I responded to the cable lady. “We’re happy with Hulu.”

Hulu charges us about $50 a month and offers jillions more options than cable. The only drawback was that we had to buy two “smart TVs”, smart enough to understand all the wireless-ness of Hulu. We did, they do and they work.

One of the many side benefits from Hulu has been that we were reunited with one of the best sitcoms ever to play on TV – Third Rock From the Sun, which aired on NBC from 1999 to 2006. In the series, aliens from another planet assume earthly bodies in order to observe life on earth and the results were hilarious.

Starring John Lithgow as physics professor Dick Solomon and Jane Curtain as Professor Mary Albright, Lithgow shines in his first comedic role on television. Through Hulu we can go back and watch each episode from six seasons of broadcasting. We watch at least one episode every night. We can also go back and watch all the episodes of Cheers, another great sitcom. And if you wanted to go back and see every episode of the Dick Van Dyke Show, you can do that as well.

If the cable company hadn’t gouged so much, we would never have left them. But now, I’m glad they did.

I am Jim Brewer, Editor of the new CvilleBuzz, a humble on-line attempt to entertain those, not only … END_OF_DOCUMENT_TOKEN_TO_BE_REPLACED