You are here: Home / In Layman's Terms / Par for the Course of Life 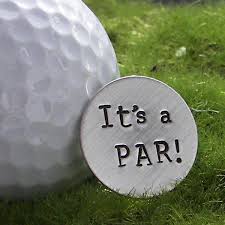 On July 27, 1986, the Rev. James A. Rhone delivered this sermon at First Presbyterian Church in Charlottesville. Many consider it one of the finest sermons of all time in explaining the true meaning of faith and Christianity. We will print this in three parts. Save them all and reprint them as one and pass it on. It is a powerful piece.

What do you think of golf?
Winston Churchill once said of it: “A curious sport whose object is to put a very small ball in a very small hole with implements ill designed for the purpose.”

These were my sentiments exactly until I married Marian and acquired a father-in-law who had shelves of golf trophies, one of which was engraved “Virginia State Seniors Champion.” It became obvious to me that some attention to golf was in my best interest. So. I decided to begin with vocabulary: bogey, birdie, par, putt, hook, drive, slice, rough, sand-trap, divot, fairway, green and the like. But knowing all the words, I still remain an unrepentant Pharisee: “I thank you Lord that I am not like those golfers who must pay for their sins in such a painful way.” What else is a golf course if it isn’t a kind of earthly purgatory exacting suffering for life’s short-comings?

But like most games, golf has its parallels with what has become known as “real life.” On paper, the game is deceivingly simple, but in practice, frustratingly complex. The course is laid out in such a way as to be readily achievable in a given number of strokes defined as “par.” Par represents a fulfillment of the purpose of the course; par is what is demanded by those who play; par is how you measure a golfer. While some few may break par, the fact remains that many times that number are, as we say, not up to par.

In the life of faith, God’s will for us, what pleases Him, His intentions for us, what He our maker wants for us, is par for the course of life. Par is basic and, in theory at least, would appear to be readily achievable, a reasonable demand. But in practice, in “real life”, it is agonizingly complicated.

For Christians, the will of God, the divine purpose, is revealed in Jesus. His teachings and what He was and is, is basic, is par for the course of our lives. For us, Jesus in notoptional. He is the goal to which we are committed, the standard of discipleship. Thus, when He counsels us to turn the other cheek, to walk the second mile, to love our neighbor as ourselves, He is touching upon requirements, not electives. When he instructs us to forgive 70 x 7, to do to others as we would have them do to us, to adopt the posture of a servant, he is referring to essentials, not extras. When He counsels that those who have much, of them shall much be required, or teaches us to pray that God’s rule may be known on earth as it is in heaven, He is dealing with the coreof life’s meaning and not the periphery.

And we agree – it sounds good and we know it is what we need, what the world needs. Yes, but the achievement of par – there’s the rub. Can anyone be a Christian? Really?

I was reading somewhere and this question was raised about the word “Christian” – is it a noun or an adjective? The writer felt that maybe we should use only it as an adjective; that it was presumptuous for us to use it as a noun since it meant to be something that we rarely are: Christ-like. Are we Christians only when we love and help and show compassion, and do we cease to be a Christian when we hate and hurt and show selfishness? Well, Luther would disagree with that writer. He knew spells of doubt, but he would ward off his depressions by saying: “I am baptized.”

He meant he was a Christian whether he felt like it or not; that was his direction. As in golf, she is a golfer whether she stands shin-deep in the rough where she shouldn’t be, or in the middle of the fairway where she should be. He is a golfer whether he stands mired in the sand trap where he shouldn’t be, or on the green where he should be. Though they bogey every hole (that is bad), they are still golfers. Yes, they become a little discouraged, a little angry, but no, they don’t quit, they don’t give up when they fail to reach their goal. Indeed, it is the goal (par) that keeps them going. They know that the trouble is not with the design of the course or the rules of the game. The trouble is with the golfer who needs to improve, to become better.

Par for the Course of Life: Part II

Par for the Course of Life: Part III

I am Jim Brewer, Editor of the new CvilleBuzz, a humble on-line attempt to entertain those, not only … END_OF_DOCUMENT_TOKEN_TO_BE_REPLACED