You are here: Home / In Layman's Terms / Be Still 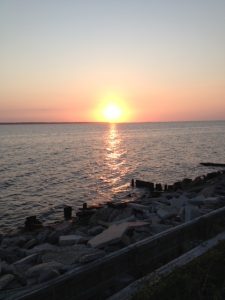 I learned how to be still when I was 12-years old and set off in the hills of West Virginia to hunt squirrels, at first with no success. I stepped on twigs, I was in constant motion and anything but still. When it comes to being still – really still – squirrels are good teachers. If you turned your head when a squirrel was scratching in the leaves behind you –  no squirrel. They scampered off. If you became restless and tried to stalk a squirrel high in an oak tree, you were almost certainly destined to failure because squirrels can see and hear things that a human can’t. A good squirrel hunter had to sit absolutely still, keep quiet and patiently wait for the squirrel to come close enough for a shot.

Being and keeping still in the woods is difficult, but perhaps even harder is to be still in life. We have so much going on – jobs, family, health, electronic gadgets, kids, noise, distractions. It is really hard to simply be still, especially when it comes to matters of the spirit.

In the Bible there was a prophet named Elijah who had a “being still” problem.

Elijah had just made a fool of 450 of Baal’s top prophets and there was a bounty on his head. All the other prophets of God had been killed by Jezebel and Elijah was on the run. He was instructed to meet with God on a mountain.

So Elijah went to the mountain and saw a mighty wind, a gale force strong enough to shatter rocks into small pieces.

“God will be there, in the wind” he thought. But He wasn’t.

Then there was a mighty earthquake and then a scorching fire, but still no God.

Finally, Elijah was still – totally still – and at that moment he heard a gentle whisper. The Spirit of God spoke to Elijah in a still, small voice.

How can we hear a still, small voice speaking when we ourselves are not still? Perhaps in our spiritual lives, we should be more like a squirrel hunter and less like a revival leader on a Wednesday night. Perhaps we should find ourselves the spiritual equivalent of a patch of woods, go there and just be still.

Par for the Course of Life

Par for the Course of Life: Part II

Par for the Course of Life: Part III

I am Jim Brewer, Editor of the new CvilleBuzz, a humble on-line attempt to entertain those, not only … END_OF_DOCUMENT_TOKEN_TO_BE_REPLACED