You are here: Home / HUnting Update / Doe, A Deer, A Female Deer 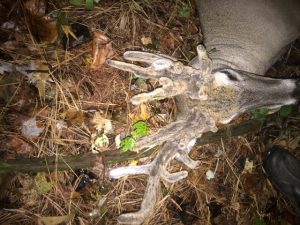 On Wednesday, October 16, Bo Bundrick of Louisa shot this deer with his bow. It was most unusual for two reasons. First, the antlers were still in velvet – even in mid-October – and secondly, it was not a buck. It was a doe, a deer, a female deer – with antlers!

A little background on antlers. Antlers differ from horns in that they are shed each year while horns are there forever. Deer drop their antlers in late winter, in January and February, but begin to grow new ones around the first of April. It takes about 4 months for the antlers to grow and become fully developed. During this time, they are full of various nerves and blood vessels and are covered with a hairy skin called velvet. In late summer, deer rub off the dead skin and the antlers are pure cartilage. So, to have antlers in velvet in October is quite rare.

While does having antlers is also rare, it is not unheard of. Some say the odds of a doe forming antlers is about one in a thousand, while others think maybe more like one in 5,000. But each year in Virginia, there are does checked in as antlered animals. It would have been interesting to see if that crazy antler formation on this animal had developed. It would have been a strange looking rack, indeed.

Bo Bundrick, by the way, is the CTE (Vocational Ed) Director for Louisa Public Schools. The deer was felled in western Louisa County.

Down a Doe for the Freezer

I am Jim Brewer, Editor of the new CvilleBuzz, a humble on-line attempt to entertain those, not only … END_OF_DOCUMENT_TOKEN_TO_BE_REPLACED