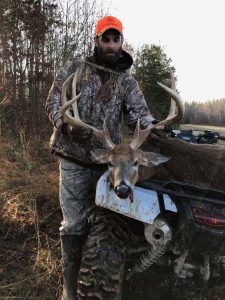 The glory days are over. No more will there be the numbers of deer killed as there were about 10 years ago. That’s when the Game Department declared war of the doe population in order to keep the overall deer herd numbers under control. Also, about that time, coyotes moved into Virginia in force. They did a number on birthing deer as did bears. Both animals have acute senses of smell and can easily track down and kill fawns. But what we may lack in numbers of deer these days is made up in size. Some really nice deer are being harvested – like this beautiful buck shot recently in Louisa County.

The big buck with a 19 ½ inch spread was harvested by members of the Fox Run Hunt Club near Holly Grove. Sherman Shifflett, a long-time member of the hunt club, said that this deer had not been seen since bow season kicked in back on the first Saturday in October, though they had pictures of the large animal on a trail camera during pre-season.

The club flushed the deer in a thick hedge row with a bird dog and the deer ran the wrong way.

Lucky Buck Runs Out of Luck

I am Jim Brewer, Editor of the new CvilleBuzz, a humble on-line attempt to entertain those, not only … END_OF_DOCUMENT_TOKEN_TO_BE_REPLACED