You are here: Home / Hawaii / A Tragic Helicopter Accident 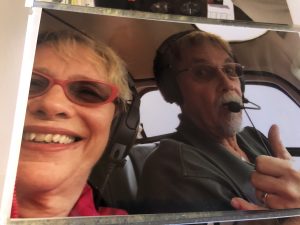 The recent helicopter crash in Hawaii really struck home. It was the same chopper and the same pilot and the same tour Nancy and I took just two years ago. The pilot was Paul Matero. We had found him to be super professional, with safety front and center. He had years of experience and trained other chopper pilots in handling bad weather. Paul worked for Safari Tours. In their 30 years of business, this was their first accident. Yet, Hawaii politicians were quick to jump on their soap boxes demanding – guess what?  More government regulations.

The accident occurred on a mountain in Kauai near the Na Pali coast.

Below is my description of our initial experience with Safari.

On Thursday, Nancy had  booked a helicopter tour of Kauai. What?

I get nervous on a Ferris Wheel, so it was with more than a little anxiety that I squeezed into a small, 7-seat chopper on Thursday morning. It turned out to be one of the most exciting and breathtaking Hawaiian adventures of all. The pilot, Paul Matero,  scooted us in and out of the waterfall-studded mountains. We passed over the Waimea Canyon, named the Grand Canyon of the Pacific, over 3,000 feet deep. We saw “Bali Hai” from the movie South Pacific. Kauai is a filmmaker’s paradise. Jurassic Park, King Kong, Blue Hawaii, Raiders of the Lost Ark, Body Heat and many other well-known movies were filmed here.

The chopper pilot showed us valleys where the first Polynesians settled and he flew over the Na Pali coast where we saw a few whales doing their thing. We saw the rainforests and flew into one valley where it is said there are 500 waterfalls, all runoffs from rainwater. One fall in the canyon is listed at 3,567 feet. In the center of Kauai, Mount Waialeale receives over 600-inces of rainfall per year. It is the wettest place on earth.

We don’t know yet, but I expect a combination of a sudden downpour and an intense air current off the coast led to the accident.

Our hearts and prayers are with Paul’s family, the families of the victims and the staff at Safari Tours, which is now unsure whether to reopen or not. All I can say is that if Paul was still alive, I’d fly with him again in a heartbeat.

I am Jim Brewer, Editor of the new CvilleBuzz, a humble on-line attempt to entertain those, not only … END_OF_DOCUMENT_TOKEN_TO_BE_REPLACED