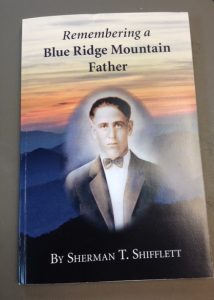 Frequent CvilleBuzz writer and contributor, Sherman Shifflett, remembers a lifetime of tales and witticisms told by his father, George “Harvey” Shifflett. Sherman decided to write them down as he recalled them. He continued writing until all those the memories turned into a great book – “Remembering a Blue Ridge Mountain Father”.

In the newly released paperback edition, Sherman recalls his father describing living and growing up in the Blue Ridge Mountains where his family was later “evicted” to make way for the Shenandoah National Park.

In the book, there are tales of hunting and farming and growing up in a large family with only the bare necessities.

Sherman writes: “Living on top of the mountain was not an easy life, and I’m not sure why my parents and ancestors put themselves through all those difficult times. It was extremely cold during the winter, and the rocky soil was not conducive to raising good crops. Although poor, the families preferred that way of life; they were fiercely independent and simply wanted was to be left alone.”

Sherman also lists many of his father’s sayings, such as: “Never get into a pissing contest with a polecat” and “It’s better to get cut by a sharp knife than a dull one.”

This is a fun and enjoyable read and provides a keen incite into mountain living as it was actually experienced. Just released, Sherman has already sold hundreds of copies of the book.

As his father would say, “I never seed the like!”

What Was That Animal?

I am Jim Brewer, Editor of the new CvilleBuzz, a humble on-line attempt to entertain those, not only … END_OF_DOCUMENT_TOKEN_TO_BE_REPLACED