You are here: Home / Guest column / About Smith Mountain Lake 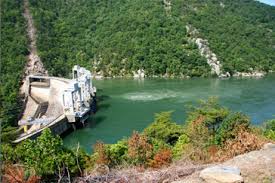 Smith Mountain Lake is a 20,600-acre lake in the Roanoke Region of Virginia, located southeast of the City of Roanoke and southwest of Lynchburg. The lake was created in 1963 by the Smith Mountain Dam impounding the Roanoke River. The lake has become a popular recreation spot and has also experienced significant development in the last decade. It is the third largest lake in Virginia, but it’s the largest lake contained entirely within the Commonwealth.

The idea of Smith Mountain Lake was conceived back in the 1920’s – to dam the Roanoke River and the Blackwater River at the Smith Mountain gorge to generate electricity. Construction began in 1960 and was completed in 1963. The lake reached its normal water level in March 1966. The lake currently has over 500 miles of shoreline.

The level of the lake normally varies by one to two feet throughout the day and night, as water flows through the dam and is then pumped back up. The normal maximum level of the lake is regulated to 795 feet above sea level.

The countryside surrounding SML is stunning with a backdrop of the Peaks of Otter and the Blue Ridge Mountains and acres of farm and agricultural land in every direction.

It is a beautiful lake, featured in the 1991 movie comedy “What About Bob?”, directed by Frank Oz and starring Bill Murray, Richard Dreyfuss and Julie Hagerty.

Plant For The Butterflies

I am Jim Brewer, Editor of the new CvilleBuzz, a humble on-line attempt to entertain those, not only … END_OF_DOCUMENT_TOKEN_TO_BE_REPLACED