You are here: Home / Guest column / A Dear, Deer Story 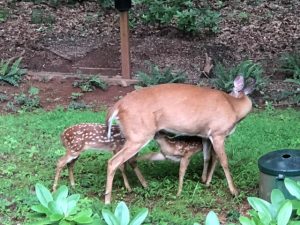 “Déjà vu all over again!”

Yogi Berra had something there. Our mama deer of spring 2017 showed up again in the woods in our side yard, tummy bulging with expectation.

Last year’s little one went out into the brave new world at about one month old, still full of spots, but needing to get out of our fenced yard because Lucy the Grand Dog was coming to spend a week, and sharing the space probably wasn’t a good idea. So all the gates were opened at night, and there was no evidence of mother and fawn the next morning, although we continued to see them around, with lots of cousins, throughout the summer.

Deer, like every other species, have their own distinctive markings, and mama has a blackish face, black ear tips, and a small scar on her right flank. We actually witnessed her first delivery with binoculars from my office window, down the hill a bit but safely within the fence.

The Virginia Game and Inland Fisheries site has a lot about animal habits, and apparently if the newborn is a female, it may return to the place of its birth to have its own offspring. I think, however, that this year it was the same mama because of her markings; but either way, it seems like our hostas are in for a struggle for quite a few years. Our home is invitingly private, a wooded hillside in the Southwest Mountains, and this particular mother deer was very smart to jump the fence and deliver in the safety of our yard, away from coyotes and wandering dogs.

So fast-forward to late May 2018. I didn’t see the birth this time, but a day or two later she returns over the fence, and an amazingly small fawn scampers over to her for breakfast. No, wait, I’m seeing double, there are twins, both assaulting the breakfast bar! So cute, but same problem as last year, Lucy the Grand Dog is coming for a week this year also. So we again open all the gates, but we continued to see the babies inside the fence – the mother coming and going, but the twins were hiding out in the woods away from the house. Somehow, since Lucy clung to us inside the house most of the time, the little deer trio again survived, and we have seen them frequently over the summer.

Looking ahead to next year, we’ll probably have a whole herd inside, because another four-footed neighbor, Mr. Bear, broke down the fence, and the wildlife comes and goes at will. Yes, we could do many things to run off our wildlife neighbors, but co-existing brings so many pleasures and opportunities to see special things, it is well worth it. And I always wanted a completely naturalized yard! Except for the goldfish, err, frog ponds, that is.

Snakeheads on the Move

I am Jim Brewer, Editor of the new CvilleBuzz, a humble on-line attempt to entertain those, not only … END_OF_DOCUMENT_TOKEN_TO_BE_REPLACED