You are here: Home / Golfing for Duffers / My Golf Game Is In Shambles 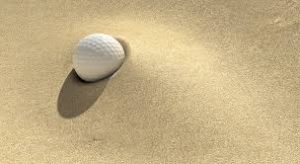 My golf game is now in shambles. Due to the intense heat, threat of thunderstorms and irregularities due to the Chinese virus, I haven’t played in 6 weeks. This means I have lost all momentum and will have to start from scratch in returning to my well-established bad habits.

It’s not easy to master, for example, the rocket-ship sand blast. I’ve been working on this unique shot for years. To pull it off,  you have to be able to swing at a ball in a green side bunker, and aim not behind the lie, as most do, but send a violent sand wedge down and strike the ball directly.  This ends up as a 120-yard shot, not only out of the trap but across three fairways, and up on the 10th green on the back nine. It is a most impressive shot, even if I say so myself, and now I’m going to have to learn it all over again.

And how do you consistently three putt from 8 feet?  This really takes concentration and repetition. I have it  down pat. For the first putt, you have to ignore the fact that it’s a steep downhill lie on lightning quick greens and give the ball a firm rap, which results in the ball ending up further away from the hole than when you began. Then, as sweat begins to form on your brow, and it’s still March, you give the ball another whack and this one ends up three feet short. That’s when your golf partners say, “I’ll give you that one” and at least you don’t four putt. As a I say, it’s taken years and years to get my game in such  poor condition.

The shot that most worries me is recapturing the magic of beginning my downswing before I have finished my back swing. There are contortionists with Cirque du Soleil that cannot come close to this swing, which is almost a physical impossibility. This shot requires that your body move in multiple directions at the same time and it is indeed a miracle that you are able to strike the ball at all.  I have to admit that sometimes I whiff it, but I can’t tell you how long I have been working on this, my signature shot.

I am afraid now that when I go out next week, I might revert to simply swinging the golf club and hitting it flush down the fairway – and all that work will go down the drain.

Tee it Up at Smith Mountain

A Round at The Homestead

I am Jim Brewer, Editor of the new CvilleBuzz, a humble on-line attempt to entertain those, not only … END_OF_DOCUMENT_TOKEN_TO_BE_REPLACED