You are here: Home / Golfing for Duffers / Mr. Magoo Golf 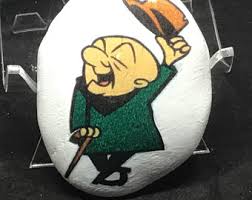 Remember Mr. Magoo? J. Quincy Magoo – the elderly, wealthy, cartoon character who got into a series of comical situations as a result of his extreme near-sightedness?

I’m a little like Mr. Magoo, other than the wealthy part. I wear tri-focal glasses. Blind, blinder and blindest are my lenses. I can see pretty well at distances, however, but not so much up close.

I wear glasses most all the time, but the last time I played golf, I noticed that at the top of my back swing – looking down at the ball – I lost it. Couldn’t tell where it was. It was in between the lens lines and I had to guess with my swing where the ball was.

That’s not a good thing if you’re a golfer. It would be like Ray Charles on a driving range.

It occurred to me that maybe, just maybe, I’d do better playing golf without my glasses.

Last week I did, and I was right. I did play better. I had my grandson James with me and we teed it up at Meadowcreek and had a fun round. I shot an 83, which is really good for me, and I could see the ball on every back swing.

I could not, however, read the scorecard, but James could and did. From now on, the glasses stay in their case when I play golf. Mr. Magoo would want it that way.

I am Jim Brewer, Editor of the new CvilleBuzz, a humble on-line attempt to entertain those, not only … END_OF_DOCUMENT_TOKEN_TO_BE_REPLACED