You are here: Home / Golfing for Duffers / Get Out of Sand Free 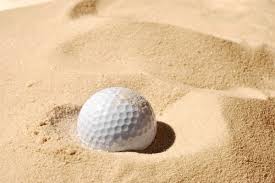 Remember Monopoly? Get Out of Jail Free? That was a nice card to have, even though sometimes it was better to stay in Jail for three rolls rather than to head down to the yellow and green properties stacked with hotels.

But how about a Get Out of Sand Free card? In this case, it’s a golf club, not a card, and if you get in the sand, it’ll get you out. It’s a 55-degree utility wedge and it really works.

I was playing with Mike Perry at Heritage Oaks in Harrisonburg and having a pretty good round going when my nine-iron approach to the green on Number 16 went a little right and thumped in a green-side bunker. It took me two to get out and then I was clear across the green.

“Try this,” Mike said. It was a fat iron of some sort and he said just aim a little behind the ball and follow through. My ball lifted miraculously from the sand and gently settled on the green.

I knew then, I had to have this club. Mike said he bought his for ten bucks at an over-run store. But he said it was a utility wedge.

I went on line the next day, found an XE1 Wedge for $39.95 and it now has a permanent place in my golf bag.

Last Wednesday I was playing at Tanyard in Louisa and landed in a bunker on the last hole. To get on the green, I had to cross over even another bunker, but I wasn’t worried. I got out my utility wedge, swung through the ball and it landed on the green. I was putting!

The problem with sand shots for most high handicap golfers is that we don’t practice sand shots. Who wants to practice getting in and out of the sand? That’s like practicing a root canal. Good sand players have the ability to control the angle and the face of their wedge as it bites into the sand, but we duffers never know what will happen. Will we send the ball zooming across the green or will we hit it fat and the ball stays in the trap? Pick your poison.

With the utility wedge, if you hit somewhere behind the ball and follow through, it gets you out of the sand.

I can’t wait to play Trump National in Charlotte again with my brother, Charlie. This layout has more sand than the beaches at South Nags Head and I manage to find my way into most of it, often taking two, sometimes three to get out. That’s not going to be a problem anymore.

Now, putting on those lightning quick greens? That’s a big problem, but not the sand.

A Trip to The Royal Virginian

I am Jim Brewer, Editor of the new CvilleBuzz, a humble on-line attempt to entertain those, not only … END_OF_DOCUMENT_TOKEN_TO_BE_REPLACED