You are here: Home / Golfing for Duffers / A Round at Waynesboro Country Club 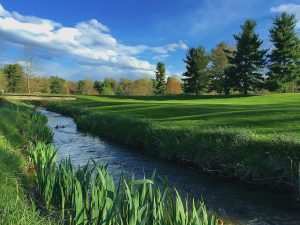 The Waynesboro golf course nearly bit the dust a couple years back. It was hemorrhaging money – not enough players or members, and it was on the auction block. Many feared the course would be bulldozed and sold off as residential lots, lost to golf forever. But someone stepped in, bought the property, spent some money in renovations and now the course is once again challenging golfers of all levels and abilities.

I played there last week with Mike Perry and we had a great time.

Last year, the club would not accept VSGA cards, or non-members. The goal was to be exclusively private, but this year the course is accepting non-members and VSGA Cards. They ask only for a 48-hour advance reservation, which is only fair if members have an event or special outing.

The course was in good shape in spite of recent highwater that came up on several greens. The fairways and the rough were in excellent shape. I should know about the roughs. I was in it a lot.

But we had fun and it cost us just $30 each, with cart. I understand that Old Trail is now $60 on a weekday and they do not accept VSGA cards. On most weekday afternoons it’s a ghost town. When you can play a nice course like Waynesboro Country Club, why would you pay twice that amount for a course with one Porta-Potty?
Anyway, call Waynesboro Country Club at 540-943-1131 for tee times. The number listed in the VSGA card booklet is incorrect.

I am Jim Brewer, Editor of the new CvilleBuzz, a humble on-line attempt to entertain those, not only … END_OF_DOCUMENT_TOKEN_TO_BE_REPLACED