You are here: Home / Golfing for Duffers / A Fowl Round of Golf 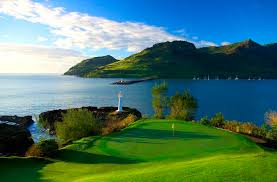 The state bird of Hawaii, at least on the island of Kauai, is the chicken. So it was no surprise when I was greeted on the driving range with a Rhode Island Red Rooster. This chicken could talk. He asked me if I had ever played the course before and I sad “No, my first time.” The chicken then clucked about while he watched me hit a few balls. He asked me how many balls I had brought with me. I told him, “Seven” and after seeing me swat a few, he said, “That’s not going to be enough.”

As it turned out, I had plenty of balls since they are easy to find in sand traps and that’s where many of my shots on the front nine ended up.

The one thing I had wanted to do on this, our 50th Anniversary Cruise of Hawaii, was to play a round of golf somewhere on the islands. Corey, the PGA Golf Pro on our liner who arranges all the golfing for passengers aboard the Pride of America, had set me up to play the Ocean Course at Hokuala. He said I would like it and did I ever!

Hokuala is in the Pebble Beach category. It is a spectacular layout. They set me up with two other golfers, about my age, decent golfers, but not great. Doug and Tom said they played “vacation golf”.

“Well, if you hit one you don’t like it, hit another,” they said. I knew I would like these guys. We had a great round together.

In describing this course, there are indeed chickens – everywhere there are chickens. They served as our gallery. Tom, who has played here on vacation for over 20 years, said that in 1992, they had a severe hurricane on Kauai, with winds exceeding 200 miles an hour. It leveled all the commercial chicken coops, the birds escaped and they haven’t been able to catch them since. They gave up years ago. The chickens basically run wild and they are flourishing, with no natural predators. I would say that an insect on the ground in Kauai has a life expectancy of less than 60 seconds before one of the chickens gets him.

Golfers, if there is one course on the islands to play, it is the Ocean Course at Hokuala. It is a Jack Nicklaus Signature course. It is in “beyond pristine” condition. The greens are large and slightly, not overly, undulating. They were quick, but not overly so. Interestingly, the putts always break towards the mountains, that’s how the grasses grow. The tee boxes and fairways were near perfect. The course was fairly wide open, except for the intermittent “jungles”. The territory between fairways is not a rough, it’s a jungle out there. I was looking for one of my balls and thought I caught a glimpse of Tarzan and Cheetah swinging from the vines. It is thick, lush vegetation. Scattered along the fairways are deep bunkers – I mean deep bunkers. It took me an average of two shots per bunker to escape, not my forte. I didn’t score well on the front nine. The back nine is the Ocean Course, with many holes set right along the blue waters of the Pacific. It’s windy out there, really windy. If the wind is at your back, you can boom drives like Dustin Johnson. If it’s in your face, go up three clubs if you expect to get where you need to be. There were some extremely challenging holes on the Ocean Course, over the lava-lined ocean, into the wind, but I managed to avoid all the traps and shot a 48, I was very pleased

I saw lots of interesting birds and wildlife. In addition to the chickens, there were native geese, ducks, mud hens, beautiful black birds with red heads, mynah birds, doves, killdeers, golden finches and others. The plantings were also incredibly beautiful.

Hokuala is not an inexpensive course, it set me back nearly $300 with club rentals and greens fees, but it was worth every penny. Plus, they give you two sleeves of balls! I told that rooster I’d have enough balls. I had four left over!

Life From the Forward Tees

A Fun Round At Tanyard

I am Jim Brewer, Editor of the new CvilleBuzz, a humble on-line attempt to entertain those, not only … END_OF_DOCUMENT_TOKEN_TO_BE_REPLACED