You are here: Home / Golfing for Duffers / A Floppy Flop Shot 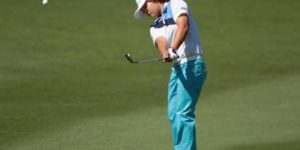 On occasion I’ll hit a decent drive on a short par 4, followed by an iron that is just right in distance, but a little left of the green. Like many average golfers, I tend to pull short irons. The problem I now find myself in is being within sniffing distance of the pin but looking into the bowels of the nastiest sand trap this side of the Sahara. Even worse, the green is sloping away, and I only have a little space to land my shot if there is even the slightest chance for a par.

There is only one shot in golf for a situation like this. The flop shot – a unique golf shot that goes nearly straight up in the air and “flops” back down on the green, settling quickly. The flop shot is one that seemingly defies the laws of physics. You swing with authority but the ball shoots high in the air and only travels a short distance.  Mickelson and Stricker do it all the time. I sure would like to know how to pull this shot off.

As the great Chinese golfer, Confucius, once said: When in doubt, ask a pro.

Seth Van Hall, the one-time golf pro at Old Trail Golf Course in Crozet, explained it like this.

“This is a fun shot,” Seth said. “It’s fun to see a ball go so high and flop back down. Because it’s fun, it’s a shot that tends to be overused by both advanced and average golfers.”

Seth explained that when hitting short shots around the green, the main objective is to get the ball on the green and get it rolling as quickly as possible.

Seth said that the flop shot should only be attempted with a sand wedge or a lob wedge, not with a pitching wedge or a 9-iron. He also said that this shot, like most shots around the green, should be practiced, practiced and practiced some more.

Here’s how Seth sets up.

“First, take a slightly wider stance than when hitting a normal pitch or chip,” he instructed. “Then, open your stance about 45 degrees, pointing your body left of the target (if you are right-handed).”

Seth said that the ball position should be slightly forward of center in your stance.

“The amount of height required for the shot you are hitting will dictate how far forward to play the ball,” he said. “If you need a lot of height, put the ball further forward, but be careful not to let it go too far forward.”

Practice, Seth said, will show the golfer exactly how far forward in the stance to position the ball.

“When addressing the ball, tilt the shaft of your club slightly away from the target and open your club face,” he continued. “As you take your backswing, try not to break your wrists as much as with a normal swing. On the downswing, swing down your body line, accelerate and envision the club face sliding beneath the ball.”

At the moment of truth, when an average golfer attempts the flop shot, it becomes a matter of faith.

“Trust that the loft of the club will give you the proper trajectory and avoid ‘flicking’ the club head, as this will result in the dreaded ‘skull’ shot.” Seth warned.

You just have to believe the shot will work, and it does, if you follow Seth’s instructions.’

“The flop shot takes a reasonable amount of practice, but it’s a shot that all golfers should have in their bag,” Seth concluded. “Just remember to use this shot only if the situation requires it.”

A Trip to The Royal Virginian

It’s Only A Putt

The Price of Golf

I am Jim Brewer, Editor of the new CvilleBuzz, a humble on-line attempt to entertain those, not only … END_OF_DOCUMENT_TOKEN_TO_BE_REPLACED