You are here: Home / Eatin' Out / Vocelli’s Artisan Pizza 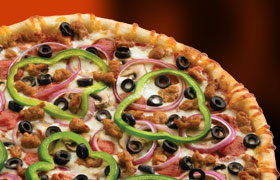 I would give anything to be able to go to a restaurant and write an “Eatin’ Out” review –  even it was a bad experience. I am so ready to go out to eat again, and as soon as the doors open at Bonefish or any other of my favorite eateries, I’ll be there, virus or not.

In the meantime, at least we can go to some restaurants and pick up an order to go. Last Sunday, we decided on a pizza and called Vocelli’s.

“What do you want on it?” I asked Nancy.

They offer what they call “Artisan Pizzas” with different combinations, so I chose The Deluxe Artisan. The large pizza with the thin crust was just $16.99 and had all my favorite toppings – red pizza sauce, pepperoni, fresh mushrooms, green peppers, red onions, black olives, Italian sausage and mozzarella cheese. It was outstanding, and a real bargain. When you add individual toppings to an order, you usually pay a heavy price. But with the Deluxe Artisan, everything is on it and it’s an excellent combination. Other Artisan blends from Vocelli include Barbeque Chicken, Meat Magnifico, Hawaiian, Quattro Cheese, Garlic Spinaci, Spring Veggie and the Mac and Cheese.

The Hawaiian includes pineapple, ham, bacon, and extra mozzarella cheese on a traditional red pizza sauce for a taste of the tropics. Maybe. I’ll try that next time.

Until the restaurant doors are opened, if you want a great take-out combination, try the Deluxe Artisan Pizzas at Vocelli’s.

I am Jim Brewer, Editor of the new CvilleBuzz, a humble on-line attempt to entertain those, not only … END_OF_DOCUMENT_TOKEN_TO_BE_REPLACED