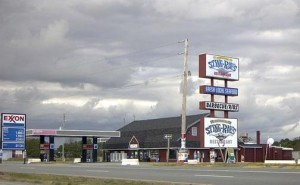 Last week, I mentioned the Blue Cheese Dressing at Sting Ray’s Restaurant on the Eastern Shore. Since some of the readers of CvilleBuzz might be heading that way this summer, Sting Ray’s is the featured restaurant this week in “Eating Out.”

My family has been visiting the Eastern Shore since 1975 when we first camped at Cherrystone Campground on the shores of the Chesapeake Bay. Most of our meals were prepared beneath the awning of our camper, including soft crabs, hard crabs, fresh catches of founder or whatever fish chose to bite our lines on that particular day. Sometime in the 80’s, a fellow camper asked if we had ever eaten at Sting Ray’s on the main highway near Cape Charles.

I knew there was a filling station there, but not a restaurant worth visiting. He said it was good. So one night when it rained, we decided to eat out. I was reluctant at first because it was obviously a gas station and there was a long line waiting to place an order. I guessed that the restaurant would seat about 60 or 70 and wondered how long the wait would be. We almost left, but saw the line moving forward as patrons came and went in fairly short order.

We finally made it to the cashier who took our order for two seafood platters, fried of course. We were seated within a few minutes and were served almost immediately. It was incredible, the fish was fried to perfection, the sides were great and since then, we make it a point to eat at Sting Ray’s every time we cross the Bay Bridge Tunnel.

Ray sold his business about 8 or 9 years ago, and it’s not quite as good as when he was on the cooking line, but it’s still a pretty darn good place to eat. They serve everything from burgers to barbeque to fresh seafood and T-bone steaks.

I really enjoy their fried chicken, cooked to order, and always piping hot and extra crispy. If soft crabs are in season, I order those and you can never go wrong with a couple pieces of fried flounder.

It’s quite an experience and I highly recommend a stop at Sting Ray’s for a great family meal. Sting Ray’s is located about 8 miles north of the Bay Bridge Tunnel at 26507 Lankford Hwy (Rt. 13), Cape Charles, VA 23310 .

I am Jim Brewer, Editor of the new CvilleBuzz, a humble on-line attempt to entertain those, not only … END_OF_DOCUMENT_TOKEN_TO_BE_REPLACED