You are here: Home / Eatin' Out / Sonny Bryan’s Texas Smokehouse 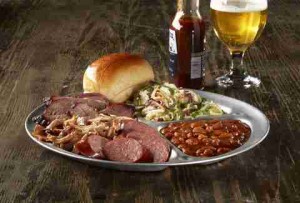 On a recent trip to Dallas for the Lighting Show, Nancy and I decided to spend one evening out to see what this Texas barbeque is all about. I have seen numerous Texas restaurants on the Food and Travel Channels and we wanted to eat at a tried-and-true barbeque joint. We asked around and decided on Sonny Bryan’s Smokehouse. With seven restaurants in the Dallas/Ft. Worth area, they came highly recommended. Even our Uber driver said that Sonny’s had great barbeque.

The restaurant was laid back and unpretentious. We ate on paper plates with plastic utensils. They had a big roll of paper towels on each table for mop-up duty. I ordered a barbeque (brisket) platter and Nancy had a brisket sandwich. The onion rings were supposed to be top notch, so I ordered those as well. We had comfort food as sides – such as fried okra, baked beans, cole slaw and potato salad.

They brought us a basket of hot yeast rolls right away, and they were the best things we ate that night. When the food came, it was clear that we were in Texas – the food was piled high. Four hungry linemen for the Dallas Cowboys couldn’t have finished what they served us.

The brisket was smoky and tender, but served with a sweet, Texas-style sauce. Too sweet, in my opinion. The fried okra was from a frozen bag and not cooked crispy enough for my taste. The other sides were decent, not great. The fried onion rings were huge – don’t know where they found such large onions, but I found them tasteless. Riverside has far better. The prices for the amount of food they served were reasonable

I’m glad we got that Texas barbeque thing out of the way. I’ll not do it again.

To me, barbeque is pork, slow cooked with a little smoke flavor and a vinegar/pepper sauce. That’s real barbeque, but I guess it’s all about what you get used to.

I am Jim Brewer, Editor of the new CvilleBuzz, a humble on-line attempt to entertain those, not only … END_OF_DOCUMENT_TOKEN_TO_BE_REPLACED