You are here: Home / Eatin' Out / Smoked Kitchen and Tap 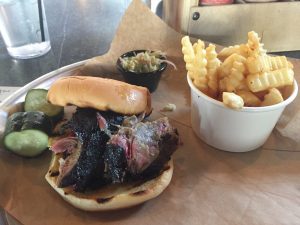 There is a new restaurant in town, in Crozet actually, and according to my golf buddy, Kevin Mann, it is worth a visit. Normally, I don’t do restaurant reviews on secondhand information, but Kevin is most reliable. Only once has he tried to putt my ball on the green since it was closer to the hole. Other than that, he is pretty solid.

Kevin said that he ended up in Crozet at dinner time while attending one of his kid’s sporting events. They went to Smoked Kitchen and Tap and Kevin raved about their barbeque. He said others in his party had burgers and sandwiches and all were good.

Smoked Kitchen and Tap is true to its namesake – they serve lots of smoked fare including Pulled Pork, Sliced Brisket, Smoked Turkey, Jalapeno Cheddar Sausage, Pulled Chicken, and Ribs. They offer several sauces with their BBQ, including NC style.

They also have interesting starters, such as Deviled Eggs, BBQ Nachos and Southern Fried Pickles. One of their signature entrees is Fried Chicken with Waffles. Their homemade desserts include House Milkshakes, Key Lime Pie and Snickers Pie.

From what Kevin says, it sounds like it may be worth the drive to Crozet next time I have a hankering for BBQ.

Eatin’ Out at Wegman’s?

I am Jim Brewer, Editor of the new CvilleBuzz, a humble on-line attempt to entertain those, not only … END_OF_DOCUMENT_TOKEN_TO_BE_REPLACED