You are here: Home / Articles From the Past / Rhett’s is Back 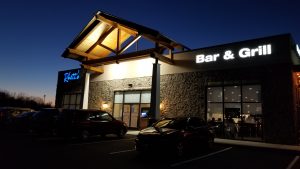 Rhett’s Bar & Grill is now open in their new Spring Creek location and is once again dishing out great food.Cville Buzz contributor, Sherman Shifflett, was assigned to take Ava Pippin out to eat there and give a full report.

His report below was very good.

Many remember dining at Rhett’s on Rt 29N in Charlottesville, VA, near the Rivanna River. My clan enjoyed many meals there, and when we made reservations, we nearly packed the house. The meals were always good.
Rhett’s has re-located to Zion’s X.  This past Sunday night, Ava and I decided to check it out. We did it on the spur-of-the-moment and did not get reservations. We did get a table, but it might be a good idea to reserve a spot.

Rhett’s has a large menu. Regardless of your taste, you will find something to satisfy. Entrees include Ribeye Steaks, Catfish, Duck, Crab Cakes and BBQ Ribs, to name a few. They also offer soups, seafood, chicken, crab legs, and seafood platters.
Fresh sandwiches are available, along with fried baskets of catfish, clams, oysters and shrimp. Your hardest decision will be making a choice.

We started with Fried Green Tomatoes as an appetizer and scarfed those down.

Ava and I flip-flopped a few times on the entrée before both of us settled on the half-pound of Jumbo Shrimp (each). We were hungry. Sides included French Fries, Black Beans, Slaw, Rice and Bread. My sides were Slaw and Cheesy Red-Skinned Mashed Potatoes. Ava ordered a Garden Salad and Potato Skins – sliced/baked potatoes filled with cheese and bacon bits.

And the service?
Excellent! Our waitress was attentive and checked on us continuously. We did not have to ask for re-fills. Overall, our meals were delicious with very good side dishes. I recommend that you give Rhett’s a try.

Take I-64 East to Zion’s X exit. Go north on Rt 15. Get in the left lane. Turn left at Spring Creek Pkwy. Take the next left towards Best Western and IHOP. Rhett’s will be on the right.

I am Jim Brewer, Editor of the new CvilleBuzz, a humble on-line attempt to entertain those, not only … END_OF_DOCUMENT_TOKEN_TO_BE_REPLACED