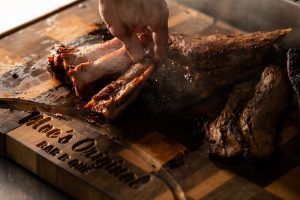 We went to a recent function catered by Moe’s Bar B Que. I put some Que on my plate and was pleasantly surprised. It wasn’t N.C. barbeque, not close, but it was very good.  They use some sort of tangy sop sauce, not overpowering and not sweet. It was  just right. And they didn’t chop the meat into smithereens. They served large chucks of succulent pork.

Moe’s was founded by three buddies from the University of Alabama in Tuscaloosa, The guys began smoking pork, and experimenting with sauces and opened their business. One of their first gigs was serving chocolate covered strawberries and pork barbeque at a Jewish wedding. That would have been fun to watch. There are now 49 Moe’s Original Bar B Que restaurants in 14 states and 17 locations in Alabama.

Moe’s has a restaurant at 2119 Ivy Road, but they do a big catering business. In these days of eating in, it may not be a bad idea to get a few neighbors together and split a catered barbeque from Moe’s.

They have other foods on their menu, but the barbeque is especially good. Try it.

I am Jim Brewer, Editor of the new CvilleBuzz, a humble on-line attempt to entertain those, not only … END_OF_DOCUMENT_TOKEN_TO_BE_REPLACED