You are here: Home / Eatin' Out / Hardee’s Thickburger 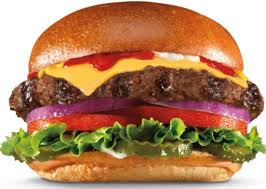 Hardee’s stormed into the fast food market in the 1960’s. A N.C.-based restaurant, Hardee’s opened the first location in Greenville, NC in September 1960. Hawking 15c hamburgers and 20c cheeseburgers, Hardee’s gave McDonald’s a run for their money in the southeast and began offering homemade biscuits to their breakfast menu. In the early days, local housewives baked at home and delivered biscuits to the stores.

By the end of the 60s, the chain had over 200 stores and was growing fast.

But Hardee’s ran into a problem common to many businesses and restaurants. They were trying to be all things to all people. They were attempting to tap into the health food market, the fried chicken market and all sorts of fad menu offerings.

They began closing stores and things looked bleak – until Hardee’s made the decision to do what they do best – and that’s big, juicy hamburgers.

While other fast food operations were pushing light and diet-friendly foods, Hardee’s announced the birth of The Thickburger, made from 100% Angus beef and packed with calories.

They even offered a 2/3 pound Monster Thickburger – enough calories for an adult male for a week.

Bottom line: Hardee’s is again prospering and their Thickburger is easily the best hamburger in the fast-food market. It is thick and juicy and a great value.

While it’s not recommended on any diet that I’m aware of, it’s damned good. If you haven’t had a Thickburger in a while, go to. Hardee’s and give it try.

I am Jim Brewer, Editor of the new CvilleBuzz, a humble on-line attempt to entertain those, not only … END_OF_DOCUMENT_TOKEN_TO_BE_REPLACED