You are here: Home / Eatin' Out / Cowlings is Open 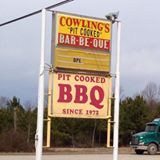 Good news, barbeque lovers. Cowlings Bar-B-Q in Waverly is not out of business. I got some bad information and announced in the last issue of CvilleBuzz that Cowlings had shuttered their doors. Several readers expressed their disappointment, but advised that it was open as recently as last month. They were right. Cowlings, the best barbeque joint in Virginia, is open for business.

When I called the restaurant to check it out, they said the confusion might have come because they close down the entire week after Labor Day. I believe that’s when a friend of mine saw that it was closed and thought it was permanently. But, fortunately, that’s not true.

My first visit to Cowlings was with Marlon Dance of Dance’s Sporting Goods in Colonial Heights. We shot some sporting clays that morning and then Marlon suggested we go eat some lunch. We drove nearly a half-hour passing by one restaurant after another, and then finally pulled into the gravel parking lot at Cowlings.

“They have the best barbeque anywhere,” my host stated unequivocally.

Cowlings uses premium pork, smoked and slow cooked like the others, but when they chop their “Que”, they leave in many of the crispy parts, browned skin and fat that give the barbeque much of its flavor. They were so good I ate two barbeque sandwiches that day, and I make it a point to stop at Cowlings each time I travel down Rt. 460 from Petersburg to Suffolk.

The sides are always good at Cowlings. The fries are brown and crispy and the coleslaw and hush puppies are excellent. If you can, save a little room for their chocolate meringue pie. Fantastic!

Each time I have visited, the service at Cowlings has been top notch and the barbeque even better. If you get a chance, stop by and give it a try. Cowlings, by the way, is closed on Tuesday’s and remember, don’t try to stop by there the week after Labor Day. The address is 7019 General Mahone Hwy, Waverly, VA 23890.

Tavern On The Rail

I am Jim Brewer, Editor of the new CvilleBuzz, a humble on-line attempt to entertain those, not only … END_OF_DOCUMENT_TOKEN_TO_BE_REPLACED