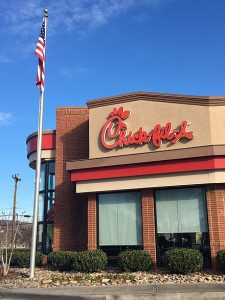 When it comes to chicken sandwiches, there is Chick-fil-A and then there is everybody else. No one else is close. Their sandwiches are simply incredible. They are leaders in a most competitive industry.

Not long ago, Nancy and I were asked to baby sit for the young boys next door. As it turns out, both have a problem with gluten. We had offered to buy dinner for the children and their mom suggested grilled Chicken Nuggets from Chick-fil-A, which has no gluten.

Trouble is – and we didn’t think of it at the time – it was a Sunday night and Chick-fil-A is closed on Sundays. I checked with all the other fast food operations and none had grilled nuggets. Everything was fried. I ended up grilling chicken for them, but I found it amazing that Chick-fil-A had recognized this void in the market way before everybody else.

Chick-fil-A can be traced to a restaurant call the Dwarf House which opened the in Hapeville, GA back in 1946. The owner, Truett Cathy, had worked in restaurants all his life and knew that long hours took their toll. He decided then and there to close on Sundays, even though it would cost him business. In order to give his employees a day of rest, Cathy made the decision to close on Sundays, Thanksgiving and Christmas. It has paid off in spades. Today, the company operates over 2,300 stores in 47 states, and soon will open a Chick-fil-A in Hawaii.

While others change their menus and go with the flow, Chick-fil-A sticks to what they do best, and that’s chicken sandwiches.

The secret was discovered in 1961, when Truett Cathy found a pressure cooker that could cook a chicken sandwich in the same amount of time it took to fry up a fast food burger. The rest is history.

Bottom line, if you happen to be sitting for kids or grandkids and you need dinner, go to Chick-fil-A and get a couple orders of Grilled Chicken Nuggets.

But never on a Sunday.

Tavern on the Rail

I am Jim Brewer, Editor of the new CvilleBuzz, a humble on-line attempt to entertain those, not only … END_OF_DOCUMENT_TOKEN_TO_BE_REPLACED