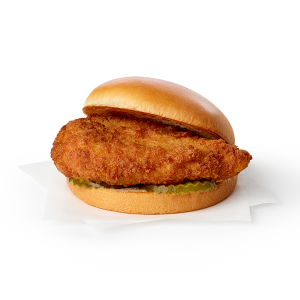 Drive by any Chick-fil-A restaurant and there  is a line. From 7 am to 7 pm, there is a line. People are willing to wait as long as it takes, to order (usually) a Chick-fil-A Chicken Sandwich. Other fast food establishments have taken notice. Now, they are all trying their versions of a Fried Chicken Sandwich. Even Wendy’s, as in “Where’s the Beef?”

If you ask my wife Nancy about a Wendy’s Fried Chicken Sandwich, she advises against it.

“It was gross,” she said in no uncertain terms,  “nasty cheese and nasty sauce.” She scraped all the cheese and sauce off and could barely eat it.

It’s simple, really: A slab of pressure fried chicken breast, seasoned perfectly, with a couple pickles and a piece of lettuce on a toasted, buttered bun. Add their world-famous sauce, and you have the reason folks are willing to wait in long lines for a Chick-fil-A.

The restaurant began as a fast food operation called Dwarf House in College Park, GA in 1946. In 1961, the owner discovered that he could pressure-fry chicken much faster than traditional frying and the chicken was superb. The first Chick-fil-A opened in a suburb of Atlanta in 1967 and the rest is history. The chain now operates about 2,700 restaurants and all are company owned.

Almost every Sunday evening that Nancy and I think about take-out, I’ll drool over a Fried Chicken Sandwich, then remember that Chick-fil-A is closed on Sundays.

Their sandwiches are so good, that America doesn’t mind waiting a day – nor waiting in line.

I am Jim Brewer, Editor of the new CvilleBuzz, a humble on-line attempt to entertain those, not only … END_OF_DOCUMENT_TOKEN_TO_BE_REPLACED