You are here: Home / Eatin' Out / Bonefish Fish & Chips 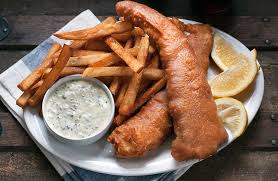 Sunday night dinner?
Whip up something in the kitchen or go out for a quick bite?
We had had a busy weekend, so Nancy and I decided to let someone else do the cooking, and since we had a coupon from Bonefish Grill for a complimentary entrée for one guest, we headed in that direction.

Naturally, we pulled up two stools at the bar where we have found the best possible service. You don’t have to wait even a minute to be greeted, drinks are quick on the draw and so are the appetizers and meals. If you need anything during the evening, the bartender is right there.

Scanning the menu, we both ordered the Fish & Chips. It’s a specialty at Bonefish and we believe it’s the best in town.

Traditionally, Fish & Chips was a Blue Collar staple in England. The dish first popped up in the 1860’s and the Brits loved it. By 1910, there were more than 25,000 Fish & Chips shops across the country.

Fish & Chips is generally served in a paper wrapper to help absorb any extra grease. The English call it a “Takeaway”. We would call it fast food. The dish became a stock meal among the working class as the trawl fishing industry in the North Sea blossomed. The term “chips” came from Charles Dickens’ classic, A Tale of Two Cities, in which he penned these words: “Husky chips of potatoes, fried with some reluctant drops of oil”.

During WW II, Fish & Chips was one of the few dishes not rationed in England. Sir Winston called the combination “Good Companions.” John Lennon was a Fish & Chips fanatic and enjoyed his smothered in catsup.

Nancy and I like ours with malt vinegar. Our two orders were cooked to perfection by the Bonefish chefs and brought to our seats too hot too eat. The crispy fries were a perfect compliment and we each had three generous portions of golden fried cod. It was delicious.

There are lots of great entrees at Bonefish Grill – one of our favorite eateries – but none taste better than a big platter of Fish & Chips.

Eatin’ Out at Sting Ray’s

I am Jim Brewer, Editor of the new CvilleBuzz, a humble on-line attempt to entertain those, not only … END_OF_DOCUMENT_TOKEN_TO_BE_REPLACED