You are here: Home / Eatin' Out / BJs Restaurant & Brewhouse 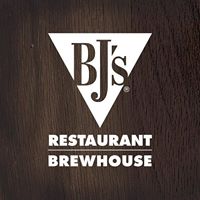 She’s a talking thing – talked me right into it!

We both decided that we didn’t want anything fancy, maybe just a sandwich and she suggested BJs, a new restaurant in Charlottesville, right across from the Post Office on 29 North.

Getting into all that new commercial development near Costco can be a tricky and it took us two tries to make the correct turn. But we finally found the place, parked and went in.

The hostess greeted us, sort of, and I wondered how the service would be. We sat at our table for about 5 minutes (it seemed longer) before we were approached. We ordered drinks and waited again. In fact, out waitress was ready to take our dinner order before the drinks were brought to our table.

After that, things got better. The cocktails were generous and not watered down, and they were reasonably priced.

Nancy and I each decided on a burger and they will put everything but the kitchen sink on them. You name it, they’ve got it. They are truly custom burgers. I ordered mine medium rare and that’s how they cooked it. Most won’t. The food was excellent, an 8 on a scale of 1 to 10, but I’d rate the service as a 6.

BJs is one of those modern Brew Houses’, meaning they serve beer you’ve never heard of and it costs twice as much as others. Craft beers are not my cup of tea. I still think an ice cold Pabst is the best you can buy. But young folks these days need an extra way to spend their money, so they choose over-priced beers.

BJs also serves Chicago-style pizza, whatever that’s worth, and they had some tempting appetizers on the menu. Desserts, too.

The food was good enough that I would come back especially if we wanted to pair a dining out experience with a good movie nearby – and that’s assuming they make any more good movies.

Eatin’ Out at Wegman’s?

I am Jim Brewer, Editor of the new CvilleBuzz, a humble on-line attempt to entertain those, not only … END_OF_DOCUMENT_TOKEN_TO_BE_REPLACED