You are here: Home / Eatin' Out / Another Visit to Ruth’s Chris 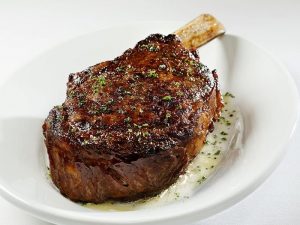 When we were in Hawaii for our 50thanniversary, Nancy and I decided to splurge and eat our last meal on the islands at Ruth’s Chris Steakhouse. It was magnificent. Last week in Dallas at the Lighting Show, we ate there again with the same results – absolutely delicious.

Dallas has three Ruth’s Chris locations and I think there are 150 or so in the US. Ruth’s Chris is a great success story in American ingenuity and enterprise.

It all began in 1927 as Chris’ Steak House in New Orleans. The largely failing business was bought and sold numerous times over a period of the next 38 years. In 1965, ignoring advice from bankers, lawyers, family and friends, a divorced, single mother named Ruth Fertel mortgaged her house and bought Chris’s Steak House, later naming it Ruth’s Chris Steak House. The diminutive lady – all of 5-2 and 110 pounds dripping wet – rolled up her sleeves and went to work. She thought that every steak should have a sizzle. Today, Ruth’s Chris is the largest luxury steak house in the world.

If you ever eat there, you’ll know why.

Ruth set up her restaurants with 1800-degree oven-broilers that seal in the steak’s juices. The restaurants then serve the steaks on a 500-degree ceramic plate over a tablespoon of butter so you can hear your steak sizzling as it is brought to the table. Ruth’s Chris uses only the finest USDA Prime beef and they season only with salt and pepper. The steaks are huge, but this time, Nancy and I knew to split our entrees rather than try to tackle the monsters by ourselves.

We ordered a 22-ounce Cowboy Ribeye and had the server split it for us. I was well marbled and bursting with flavor. We also split a baked potato the size of a small watermelon. We barely finished the steak but couldn’t polish off the entire potato. Our salads were also gigantic.

The service was simply impeccable. The owner/manager greeted us at the door, the maître d’ came several times to our table and our waiter and his assistant were at our beck and call. The food was delicious, the service perfect and if you are ever in a city with a Ruth’s Chris Steakhouse, make it a point to stop by and pay them a visit.

I am Jim Brewer, Editor of the new CvilleBuzz, a humble on-line attempt to entertain those, not only … END_OF_DOCUMENT_TOKEN_TO_BE_REPLACED