You are here: Home / Conservation / Worms In The Driveway 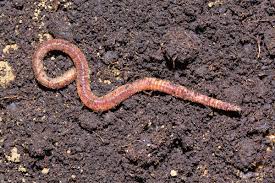 What’s a sure sign of spring – that winter is in the rearview mirror? Jonquils? Robins? Groundhogs and shadows? Well, yes, but the best sign of things to come are worms in the driveway.

I went out to get the paper a few days ago and saw that wonderful sight. There was a worm in the driveway after an evening’s rain. That’s a good sign. That means spring is not far away when both lawns and gardens will teem with worms.

I have always had an affinity for worms, dating back to the days when my dad and I went down to the creek bottom behind our house to dig them for bait. When I had a paper route as a 12-year old, I would frequently stop and pick up night crawlers in the street and put them back in the grass where they would have a chance to survive.

In winter, worms burrow deep in the earth, up to a foot, to escape the extreme cold. Then, as the days grow longer and the temperatures begin to warm a little, worms emerge from the depths to feed and mate.

Earthworms are hermaphroodites – each individual carries both male and female sex organs. They lack both an internal skeleton and an exoskeleton,  but maintain their structure with fluid-filled coelom chambers that function as a hydrostatic skeleton.

I find this interesting. Worms don’t have actual eyes but can see through special photosensitive cells. I remember as a boy when we tried to catch night crawlers at night, if you made a sudden move, they retreated instantly back into their holes. Those photosensitive eyes were extra acute.

Because I put a load of horse manure in my garden year a few years back, it is now full of worms. They love any organic matter and manure is exactly that.

Worms are underground engineers. They literally force air though tunnels as they move. This aerates the soil and mixes the compounds. Worms are vital to all forms of agriculture.

In 1881, Charle Darwin wrote: “It may be doubted whether there are many other animals which have played so important a part in the history of the world, as have these lowly organized creatures.”

I am Jim Brewer, Editor of the new CvilleBuzz, a humble on-line attempt to entertain those, not only … END_OF_DOCUMENT_TOKEN_TO_BE_REPLACED