You are here: Home / Conservation / S-s-s-s-snakes! 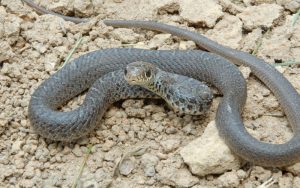 Here’s a comforting thought. It’s baby snake season. The little slithery guys are out there in large numbers, waiting for an opportunity to scare the bejeezus out of approximately half the human population. I don’t mind snakes, as long as I can see them. It’s the ones I don’t see that cause concern.

The most commonly misidentified are those of Eastern Rat snakes (aka black snakes) and Northern Black Racers, which neither species takes on their characteristic solid black appearance until they begin to mature as adults.

Juvenile Eastern Copperheads on the other hand look much like the adults, but with a bright yellow tail that is used like a fishing lure to attract prey such as small frogs and toads. In general, the best thing to do when you encounter a snake is to simply “Just Leave It Alone“.

I am Jim Brewer, Editor of the new CvilleBuzz, a humble on-line attempt to entertain those, not only … END_OF_DOCUMENT_TOKEN_TO_BE_REPLACED