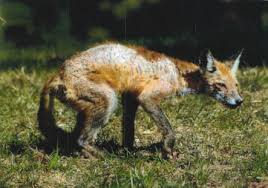 “There is a fox drinking water out of the bird bath,” Nancy said.

But there was a fox drinking water in our front yard in the middle of the day. And he had very little hair on most of his skinny body.

This would be the second fox I’ve seen recently in broad daylight in need of some serious Rogaine. The other mangy animal was at the first hole at Meadowcreek Golf Course. He was curled up in the shade, then trotted away when we pulled up in our cart.

And he did indeed have mange, a common ailment among not only foxes but also raccoons and coyotes. Sarcoptic mange comes from a tiny mite and can’t be seen with the naked eye. A female mite lays her eggs on an animal and the little beasts burrow beneath the skin, causing extreme itching and loss of hair.

Mange can be fatal, but not always. Sometimes cold weather cures the problem. Foxes with mange are not a threat to people or house pets – they just look disgusting. A fox is mostly skin and bones anyway, never a trace of fat. So when they lose their hair, it’s not a pretty sight.

They say there are medications humans can leave outdoors which will help foxes get rid of the mange, but we had a hard-enough time hiding pills in our dogs’ food bowls and getting them to take their medicine

Wild animals with mange often seek out hay to lay in, as it helps relieve the itching. Come to think of it, the fox we saw on the golf course was lying on some dead grass.

Bottom line: Don’t kill a fox just because it has mange. Leave him alone and hopefully he will heal on his own.

I am Jim Brewer, Editor of the new CvilleBuzz, a humble on-line attempt to entertain those, not only … END_OF_DOCUMENT_TOKEN_TO_BE_REPLACED