You are here: Home / Conservation / Looking for Antlers In All the Right Place 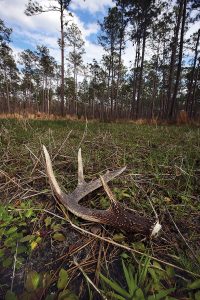 If you see a herd of deer this time of year, chances are you won’t see many animals with antlers. That’s because the bucks begin to shed their racks around January, but immediately begin to grow new ones.

A stroll in the woods right now might result in some nice antlers to use for display, for calling in deer by rattling or just for fun. The antlers can be quite beautiful.

By the next fall, the “button bucks” become either spikes or maybe a deer with as many as 4 points, but they will be relatively small. As a buck ages, and assuming there is good feed and habitat, the antlers grow, often to trophy sizes.

According to Almy, “Antlers start to grow from the tops of the pedicels in spring, and this growth is controlled by the photoperiod or day length, which in turn controls testosterone levels.”

“Starting with veins and arteries supplying nutrition, a protective skin called velvet forms over the emerging, living tissue that will eventually turn into true bone. After several months of rapid growth, the antlers are fully developed.”

If you are interested in looking for antlers, no matter the reason, you better hurry. Antlers are packed with calcium and phosphorous and are thus highly prized by mice, squirrels and other gnawing rodents.

I am Jim Brewer, Editor of the new CvilleBuzz, a humble on-line attempt to entertain those, not only … END_OF_DOCUMENT_TOKEN_TO_BE_REPLACED