You are here: Home / Conservation / Golden(ahchoo)rod 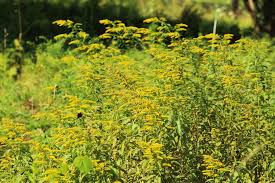 Many of those beautiful golden plants we see now along our roads are in the goldenrod (Soilidago) family. That means coughing and sneezing, right? No, that’s incorrect.

There is a misconception that goldenrod is a prime cause for hay fever, but it’s not goldenrod. It’s ragweed which is the real culprit.

Goldenrod and ragweed bloom at about the same time. But ragweed pollen is blown by the wind, reaches human sinuses and does its dirty work. Goldenrod pollen, on the other hand, is too heavy and sticky to be blown far from the flowers, and the lovely golden blooms are pollinated entirely by insects. If goldenrod is handled to any degree, like from a florist, it  can cause allergic reactions, but that’s rare.

Goldenrod gets a bad rap.

Goldenrod is in the aster family and native to North America. It’s a perennial found in meadows and open areas. It does not and cannot thrive in fields of fescue.

Goldenrod is considered a weed in this country, but is prized and cultivated in Europe. The prolific plant has many industrial and medicinal applications.

Inventor Thomas Edison once experimented with goldenrod to produce rubber, which it naturally contains. The original tires on the Model T given to him by his friend Henry Ford, were made from goldenrod. According to Wikipedia, Henry Ford, like George Washington Carver, was deeply interested in the regenerative properties of soil and the potential of alternative crops such as peanuts and soybeans to produce plastics, paint, fuel and other products. Ford had long believed that the world would eventually need a substitute for gasoline, and supported the production of ethanol (or grain alcohol) as an alternative fuel. In 1942, he would showcase a car with a lightweight plastic body made from soybeans.

The medical use of goldenrod asa traditional kidney tonic was practiced in herbal medicine to counter inflammation and irritation caused by bacterial infections or kidney stones. Goldenrod was also used in some formulas for cleansing of the kidney or bladder during a healing fast. Some Native American cultures traditionally chew the leaves to relieve sore throats, and the roots to relieve toothaches.

The goldenrod is the state flower  ofboth Kentucky and Nebraska and was recently named the state wildflower of South Carolina. It is most certainly a lovely flower and, like Rodney Dangerfield, gets no respect.

I am Jim Brewer, Editor of the new CvilleBuzz, a humble on-line attempt to entertain those, not only … END_OF_DOCUMENT_TOKEN_TO_BE_REPLACED